John was born March 26, 1924, in Freeborn County in Hollandale, the son of Bert and Gertrude Draayer. John was the oldest of eight children. He loved the farm and he loved to garden. John also worked at Hormel Foods Corporation for 35 years. He was married to Arlene Cole on May 26, 1944. They had four children and Arlene died on March 17, 1985. John married Doris Sistek in September of 1986. He was a member of Red Oak Grove Lutheran Church. 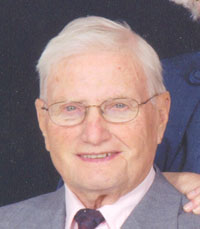 John was preceded in death by his first wife Arlene; grandson, Travis; and three brothers: Jim, Hein and Robert.

Funeral services will be held Saturday at 11 a.m. at the Red Oak Grove Lutheran Church, rural Austin, with the Rev. Gene Leiter officiating. Interment will be at Grandview Cemetery, Austin. Visitation will be held today at the Clasen-Jordan Mortuary from 4 to 8 p.m. and at the church for one hour before the service on Saturday.