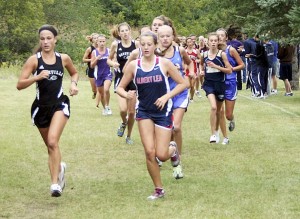 The Albert Lea cross country team got a taste of what they’re working towards Friday, running at the state meet’s course at St. Olaf College in Northfield, at the Rolfy Melby Invitational.

Ninth-grader Rachel Kenis led the Albert Lea girls and finished 66th overall with a time of 17 minutes and 20.1 seconds.

“Kenis had a strong race,” Albert Lea head coach Jim Haney said. “I was so happy for her as she was asked to accept the leadership role of running No. 1 and she came through with flying colors.”

Ashley Tewes finished 96th with a time of 18:10.75 and Emma Behling rounded of the Tigers’ top-three with a time of 18:34.90, finishing 118th overall. Morgan Haney, Samantha Stanley, Natalie Peek and Shelby Lageson rounded out the top seven.

“These girls have provided added depth to the team and did a nice job to run to the best of their ability,” Haney said. “This depth will only make the team stronger as we move toward the big meets in October.”

“Kreun led the way and the top 5 boys were within 1:50 of each other,” Haney said. “So far the boys have been able to pack up and run together and this has allowed us to beat four Big Nine schools already this season. We still are not satisfied but we are making steady progress to reaching out goal of fifth or better in the conference.”

Rounding of the top seven for the boys were Eli Malimank, Styart Behling, Brandon Bonnerup and Brandon Ranum.

“So far we have run against tough competition and we continue to improve,” Haney said. “I look for a great effort against a great field when we run against Faribault next Friday.”