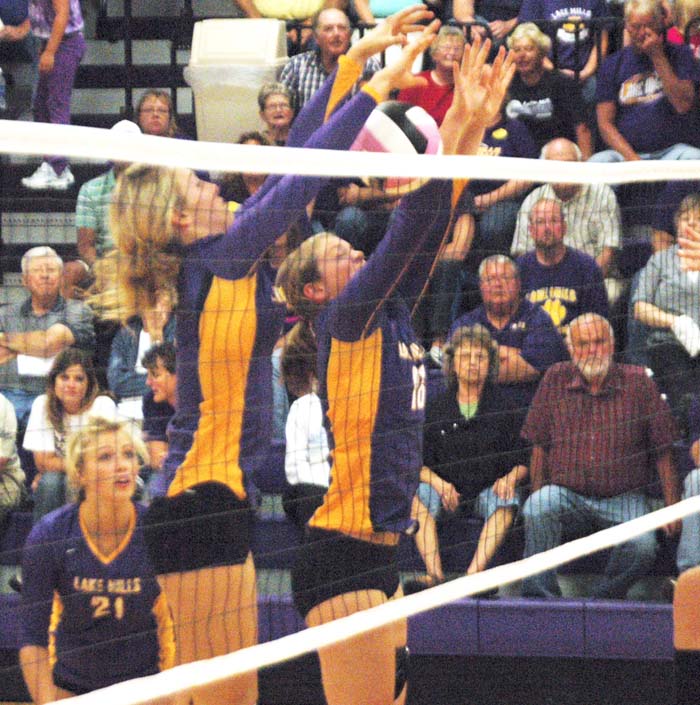 LAKE MILLS, Iowa- With a 1-0 conference record heading into Tuesday, the Lake Mills volleyball team looked to keep on rolling in the North Iowa Conference as they faced Mason City Newman on Tuesday night in Lake Mills.

The Bulldogs showed how to be efficient in the first game of the match.

In the third game, Lake Mills used an early 8-0 run to get ahead of the Knights and rolled to a 25-13 win and earn the sweep.

The Bulldogs were fantastic from the service line as they connected on over 90 percent of its serves on the night.

“Our girls were serving with a purpose tonight,” Boehmer said. “We weren’t just trying to serve the ball, we were trying to disrupt their offense. With either a sink serve or a serve that was slow into their setter. If you get a team where they have to chase the ball, defensively, it’s going to be easier to compete.”

Along with the fantastic serving, the Lake Mills front line of Josie Brackey, Amanda Lampman and Abbey Honsey all played key roles against Newman.

The trio combined for 24 kills and 4 blocks at the net for the Bulldogs.

“Jose, Amanda and Abbey can all swing hard at the ball,” Boehmer said. “one on the left side, one in the middle and one on the right side. Lindy Pins is still coming off an injury and we have Kelci Larson to step into her spot, so her and Lindy can do the job.”

The Bulldogs are back in action on Thursday as they travel to Belmond for another North Iowa Conference clash.