Funeral services for Lenore M. Clunis, 97, of Albert Lea will be held at 11 a.m. Saturday at Trinity Lutheran Church in New Richland. The Rev. Paul Andree will officiate. Interment will be at the Blooming Prairie Cemetery in the afternoon. Visitation will be two hours prior to the service at the church beginning at 9 a.m. 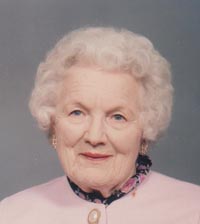 Lenore M. Clunis was born on March 30, 1913, to Carl and Julia (Lea) Jolson. She was baptized and confirmed in the First Lutheran Church of Blooming Prairie. Lenore attended Blooming Prairie High School and graduated in 1931. She was the oldest Blooming Prairie Blossom known at this time. Lenore attended Winona Business School for one year. On July 1, 1933, Lenore was married to George Clunis at Bethel Lutheran Church in Minneapolis. They moved to New Richland where George was manager of the Standard Lumber Company and Lenore worked as bookkeeper. She later worked as bookkeeper for United Building Center in Waseca for 13 years, retiring in 1972. Lenore sold her home and moved to Primrose Apartments in Austin in 2003. She became a resident of Hidden Creek Assisted Living in Albert Lea in 2006. Lenore was a life long member of Trinity Lutheran Church in New Richland. She participated in ALCW, circle, teaching Sunday school, altar guild, quilting and being a scripture lesson reader. Lenore served as local president and secretary of the American Legion Auxiliary and she held many district offices. Lenore was honored for being a 50-year member of the auxiliary. She was a member of the garden club, bridge club and the town study club. Lenore enjoyed reading, embroidery work, knitting, baking, gardening, traveling and visiting her friends and relatives. She cherished her visits with her four grandchildren and three great-grandchildren.

Lenore was preceded in death by her parents; husband, George; sister, Helen Jolson Konz and husband Maurice; and a nephew, Jon Konz.