The memorial service for Leslie Lamont Matthies of Albert Lea will be at 2 p.m. Friday at First Lutheran Church, Albert Lea. The Rev. Dan Baker will officiate. Interment will be in Hillcrest Cemetery. Visitation will be from 5 to 7 p.m. Thursday at Bonnerup Funeral Service and one hour before the service at the church. Memorials are preferred to Crossroads Community Hospice, Albert Lea. 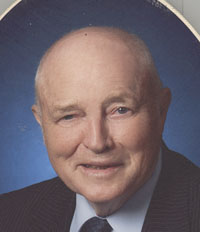 Leslie was born May 22, 1926, in Freeborn County to Harry and Ruth (Stevens) Matthies and was a lifetime Albert Lea resident. He attended Albert Lea Schools. He married Germaine A. Trytten on Nov. 15, 1946, at the First Lutheran Church of Glenville. They had been married 64 years. He worked for Wilson’s for 40 years retiring at the age of 56. Leslie had owned an acreage near Lyle and it was a place where his family would go for summers and holidays. He enjoyed pulling his grandchildren behind his lawnmower around the acreage. Leslie was a member of the Eagles where he listened to the Blue Banners and danced. Leslie also loved to work with his hands and fixed many things brought to him by others including fixing clocks. He was a very social person who would go to coffee at Blondie’s Grille every morning to be with his friends. Leslie loved pets.

Leslie is preceded in death by his parents, Harry and Ruth Matthies.

He will be sadly missed by his family and friends.