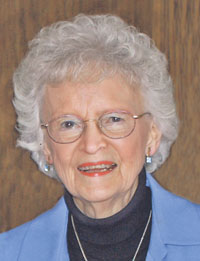 Funeral services for Marjorie M. Christensen will be held on Thursday at 2 p.m. at the Assemblies of God Church, 1540 South Shore Dr., Albert Lea. The Rev. Lee Freshour will officiate. Interment will be at Hillcrest Cemetery in Albert Lea. Visitation will be held at Bonnerup Funeral Home, 2210 Main St., Albert Lea from 5 to 7 p.m. Wednesday. Marjorie died Sept. 3, 2010, after a long and courageous battle with pulmonary fibrosis. The family is indebted to Dr. Vocal and the nurses and aides from home hospice who gave her kind and wonderful care.

Marjorie was born on June 11, 1922, to Gideon (G.R.) and Edith Borland in Albert Lea. She graduated from Albert Lea High School in 1940. On Feb. 20, 1942, she was united in marriage to Floyd M. Christensen. Following Floyd’s three years of service in World War II, they built their home on Wedgewood Drive and lived there for their 68 years of marriage. During the war, Marjorie worked at the former Northside Drug Store. Later, she worked in the school cafeterias at both the (first) Albert Lea High School, and at Southwest Junior High School. She enjoyed sewing and cooking, especially her wonderful homemade bread, lefse, and her not-to-be-beaten homemade pies. She was a longtime member of Assemblies of God Church and active in the intercessory prayer group and other church functions. She was very fond of her friends at church and cherished their fellowship.