Funeral services for Maynard Raymond Jacobson, 88, of Albert Lea will be held at 2 p.m. Saturday at Our Savior’s Lutheran Church. The Rev. Wayne Halvorson and Vicar Kassera will officiate. Interment will be at the Hillcrest Cemetery. Visitation will be from 5 to 7 p.m. Friday at Bayview/Freeborn Funeral Home and one hour prior to the service at the church. To sign the guest book, go to www.bayviewfuneral.com. 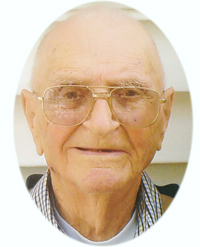 Maynard Raymond Jacobson was born on May 13, 1922, to Carl and Laura (Rafdahl) Jacobson in Thompson, Iowa. He grew up in the rural Thompson area and attended school in Thompson, Iowa. On Dec. 17, 1942 he was united in marriage to Annabel Christensen in Albert Lea. The couple made their home in Albert Lea and Maynard was employed by the City of Albert Lea for 30 years in the utility department. Maynard was a member of Our Savior’s Lutheran Church and the Eagles Club #2258. He enjoyed bingo, fishing and visiting with his friends. Mostly, Maynard loved spending time with his family, especially his grandchildren and great-grandchildren.

Memorials are preferred to the American Cancer Society, Our Savior’s Lutheran Church, the Good Samaritan Society or the Donor’s choice.