Chief Master Sergeant Michael A. Hedum, Superintendent, 49th Maintenance Group, Holloman AFB, New Mexico, recently retired after 24 yeras in the U.S. Air Force. Hedum grew up in Albert Lea and grauated high school in 1980. He entered the Air Force in October of 1981 and began his career as an aircraft crew chief. 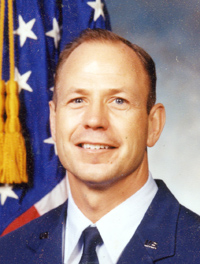 He is the son of Vic and Mary Nelson of Albert Lea and Art Hedum of Tacoma, Wash.