Tuesday night I went to bed a happy man. I’d attended Lakeview Elementary’s annual picnic with my two daughters, came home and made it through baths, stories, and lights-out seamlessly. I even managed to grade seven essays before 9:30 and hang out with my wife, Jenny, for a while before returning to the computer, completing the first draft of my column, and reading that the Twins had clinched a playoff spot. For perhaps the first time in my life, I was the model of efficiency.

I knew it wouldn’t last. 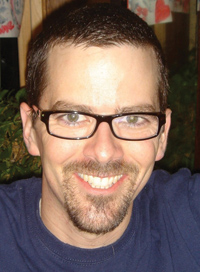 Wednesday night as I folded laundry and listened to the news, I heard an interview with St. Paul and Minneapolis Archbishop John Nienstedt, in which he explained why and how the Catholic bishops in Minnesota were mailing 400,000 anti-gay marriage DVDs to Minnesota Catholics. The Star Tribune had carried the story in Tuesday’s paper, but my efficiency must have kept me from noticing.

Jenny was on her way out the door to take our oldest daughter to her first communion class at St. Theodore’s when I told her about the story.

Fifteen minutes later she called me and suggested I scrap the column I had written the night before and address the issue at hand.

Gay marriage has received a lot of attention nationally and locally over the past year, and I doubt I’ll change many minds with this column, but that’s not necessarily my purpose.

Instead, I hope to be a voice of dissent from within the Catholic Church not only for its general intolerance of gay marriage but also for the intentionally manipulative manner in which the church has presented the issue while refusing to commit the same attention and resources to other pressing issues of peace and justice that concern Catholics. And I hope that my voice reminds others who feel the same way within the church that they are not alone.

Being intentionally misleading is not in the spirit of Christ, and in the DVD Archbishop Nienstedt makes a six-minute appearance (audio available online) in which he attempts at one point to connect gay marriage to issues such as rising divorce rates, single-parent families and poverty related to absentee fathers. One doesn’t rise to his position in the church without a high degree of intelligence, and Nienstedt surely knows that gay marriages don’t lead to heterosexual divorces, single-parent families or poverty. His wording in the video is carefully calculated, never stating explicitly that gay marriage causes such things but clearly implying a correlation between these issues by suggesting that these problems could somehow be abated by making gay-marriage unconstitutional.

Nienstedt is also misleading as he presents the usual bogeyman argument, that same sex marriage somehow threatens the institution of traditional marriage. I’ve thought a great deal about this and am baffled as to how the marriage of two gay men or women could possibly pose a threat to my marriage. To be honest, most of the major threats to my marriage have come primarily from one source: me. I won’t dwell on my own faults (self-centeredness, poor communication habits, etc.). And I understand the gay marriage scapegoat, but I’m willing to take responsibility for myself.

When Archbishop Nienstedt was asked how these DVDs and the mailings were paid for, he said that the funds came from a donor who wished to remain anonymous. While relieved that none of my dollars funded this campaign, I find it troubling that the church is willing to accept such a large donation and wage such a substantial media campaign without disclosing who paid for it, particularly in an election season. It’s irresponsible.

Nienstedt denies that the DVD mailing amounts to political activity, but yet he urges voters to have their Catholic values represented at the polls. Is it any coincidence that two of the three major party candidates for governor in Minnesota support gay marriage, and only one opposes it — Republican Tom Emmer, who incidentally has also proposed cuts to housing, human services, and other programs for the poorest in our communities. Are we really supposed to believe he’s the “Catholic values” candidate?

Catholic priests often preach about the church being “inclusive” and that “everyone’s invited to the table.” I like this idea a lot, and I wish it were really true. I wish that gay men and women in committed relationships were really invited to the table when they want to publicly celebrate their unions in their faith tradition. I wish the children of these couples didn’t have to hear that the church doesn’t approve of their families.

Jeremy Corey-Gruenes is a member of Paths to Peace. He lives in Albert Lea with his wife and two young daughters. He can be reached at jcorey2@gmail.com.