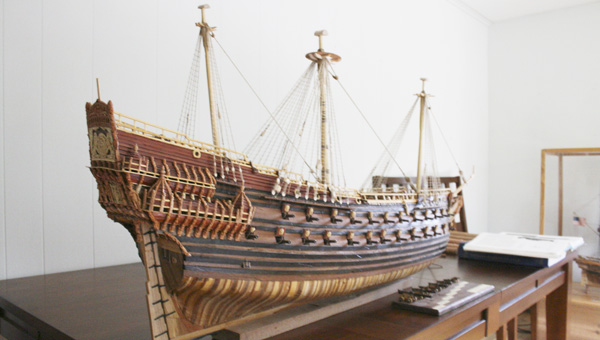 By day, Clayton Johnson is a soil scientist for the Natural Resources Conservation Service in Albert Lea, joining the staff just four months ago.

By night, he is a modeler. Every day for the past five years, Johnson has diligently crafted a model ship.

This isn’t just any model ship, however. 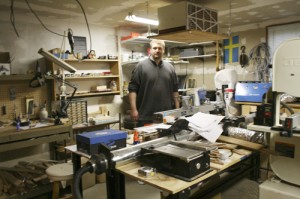 Clayton Johnson in the basement workshop of his home. Johnson spends time each day constructing his scratch-built 1:50 scale model Vasa, which will eventually be featured in the Vasa Museum in Stockholm, Sweden. -- Michelle Haacke/Albert Lea Tribune

It’s a scratch-built 1:50 scale model of the 17th century warship, the Vasa. And when he’s finished, it will be put on display at the Vasa Museum in Stockholm, Sweden, which attracts nearly 1 million visitors a year.

“The director of research at the Vasa Museum thinks it’s the most accurate in the world,” said Johnson.

Johnson’s fascination with historic ships began about 20 years ago, and he’s been building model ships since he was 9 or 10 years old.

A farm boy from Wrenshall, about 20 miles southwest of Duluth, he remembers when he first discovered the Vasa.

“When I was a kid, we had a book in the house, like a compilation of National Geographics,” he said. “There was an article of the archeology of Vasa.” 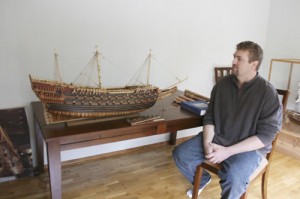 Clayton Johnson of Albert Lea has been working on his scratch-built 17th century warship, the Vasa, for five years. When completed, it will be on display in the Vasa Museum in Stockholm, Sweden. -- Michelle Haacke/Albert Lea Tribune

Modeling and the Vasa are both interests that have stuck with Johnson through his high school years at Wrenshall High School and while attending the University of Minnesota in St. Paul. By then, however, he had moved on from building with kits to scratch building, which is building a model from raw materials.

“I’ve probably built about 15 models over the years but several haven’t survived the moves or just weren’t good enough to keep,” he said.

Two impressive models that have survived the years, as he moved from the Duluth area to Pine City and then to Albert Lea, are the U.S. Frigate Essex 1799 and the Dutch 80 Gun Shop of the Line-1660s, both on display in large glass cases in the living room of his home.

In fact, he said he and his wife, Amy, chose this particular home because it had a large workshop in the basement.

“I try to work on it a little bit each day,” he said. “A project like this won’t get done if you don’t.”

Johnson’s Vasa model is constructed of 25 to 30 different types of wood that he tailored from raw materials and will measure an estimated 35 inches tall, 60 inches long and 10 inches wide when its finished. His goal is to have the model completed in 2011 in time for the 50th anniversary of the original ship’s raising from the Baltic Sea.

The most challenging part of his venture has been hand sculpting the nearly 500 tiny wood sculptures that decorate the vessel, none larger than the size of the fingertip.

“A lot of people who’ve attempted this have gotten to the sculpture part and just given up,” he said. “There’s so much carving to do.”

During the process, Johnson has used a 500-page book titled, “Vasa I: The Archaeology of a Swedish Warship of 1628” as a guide and kept in close contact with the director of research at the museum.

“I’ve been to the museum twice and this project has allowed me to meet people from all over the world,” Johnson said.

“Overall it has been a very rewarding, educational, and challenging experience, one of the most that I have ever put myself through,” he said. “I don’t know if I would want to do it again, but I wouldn’t trade the experience for anything.”