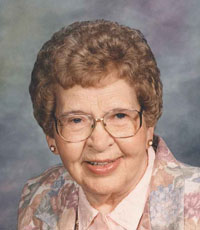 A memorial service will be held at 11 a.m. Saturday at Bethany Lutheran Church in Joice, Iowa, with the Rev. Bill Peters officiating. Family will greet friends at the church one hour prior to the service on Saturday.

Myrtle Marie Huso was born on July 14, 1912, in Lake Mills, Iowa, the daughter of George and Theoline (Anderson) Bendickson. She attended the Lake Mills public schools and graduated with the class of 1931.

On June 12, 1932, Myrtle was united in marriage to Glenn L. Braund. They farmed in the Lake Mills area until Glenn’s death in 1971. They attended Round Prairie Lutheran Church of rural Glenville where she was a member of the Martha Circle.

Myrtle married a high school friend, Lloyd Huso, of Joice, Iowa, on July 5, 1979, at Round Prairie and were blessed with 21 years together before his passing.

Myrtle was employed at the Gamble store in Lake Mills, Wallace’s Department Store and the Clothing Care Center Rental Dept. in Albert Lea.

She loved playing the banjo and with 11 friends formed a kitchen band, The Symphonettes, who played for more than 20 years at various functions and parades. They were part of the Eagles Auxiliary in which she served as its president in 1978 and was chaplain of the Drill and Ritual team for several years.

She is survived by her sister, Vivian Knutson of Albert Lea; many nieces and nephews; Lloyd’s children, grandchildren and great-grandchildren.