“Things are nearly copacetic. I just got a new driver’s license. I don’t know how they manage to make a handsome guy like me look like an orangutan on a bad day. I don’t like the photo on my license.”

“Trust me. Four years from now, you’ll like this photo,” I advise.

“Maybe so. At least I look better than Still Bill’s photo. He’s so lazy, he has to send a friend around back to get his handkerchief. When we were kids, he wanted to be a fire hydrant so that he could be useful without having to move. Still Bill will never drown in his own sweat. I’m sorry I’m so late getting here this morning.”

“I was supposed to help my brother Crispin roof his house. I didn’t really want to. I’d even rather talk to you than roof a house. My Magic 8-Ball is in the shop, so I thought it would be only fair if I flipped a coin to decide between roofing Crispin’s shack or coming over to your house for some of your wife’s good cooking and your lame company.”

“How long could that have taken you?” I wonder aloud.

Hummingbird — the bird and the myth

The ancient Mayans believed that the hummingbird was the sun in disguise. They thought that hummingbirds were created from small feathers left over from the construction of other birds.

In Puerto Rico, the story was told of a young couple, similar to Romeo and Juliet, whose families were unable to get along. One of the couple became a hummingbird and the other a red flower. That way they would always be together.

The Aztecs believed that slain warriors rose to the sky and orbited the sun for four years before returning to the earth in the form of hummingbirds. They spent eternity feeding on flowers and engaging in mock battles. 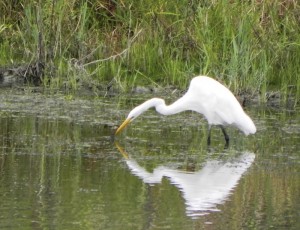 An egret kisses itself. -- Photo courtesy of Al Batt

Christopher Columbus presented a hummingbird skin as a gift to the Pope. Audubon referred to hummingbirds as “glittering garments of the rainbow.” The ruby-throated hummingbird’s short legs rule out walking or hopping. It can shuffle along a perch and scratch its head and neck with a foot.

It is a myth that the tiny flower kissers migrate by riding on the backs of geese. It is a myth that sugar water needs red color (the feeder provides that) and that feeding hummingbirds delays their migration.

A woolly bear caterpillar is a reliable sign that the seasons are changing. It eats dandelions in the spring and becomes an Isabella moth, a rather nondescript insect. This time of the year, we see them scurrying across roads. Folklore says that the blacker the woolly bear, the more severe the coming winter will be. The truth is that the woolly bears’ rusty bands widen with age.

“Can bald eagles swim?” They are very good swimmers and use their wings to swim. Sometimes an eagle latches onto a fish too heavy to fly with, so the eagle may swim to shore, drag the fish out of the water, and eat it. Eagles can open and close their talons at will. If an eagle is dragged into the water by a fish too large to lift, it is because the eagle refuses to release it. This may be due to hunger. I have heard of eagles drowning in extremely cold water due to hypothermia or exhaustion.

“Am I seeing pill bugs or sow bugs in my basement? These two come from the same family and look very much alike. Pill bugs can roll into tight little balls, while sow bugs can only fold in half. A sow bug’s legs are visible when it is rolled up. I have heard people refer to both as a roly-poly or armadillo bug. They are dark gray in color with an exterior shell. They are most active at night. They do not spread disease or contaminate food. These crustaceans are more closely related to shrimp and crayfish than to any kind of insect.

“What do monarch butterflies eat while wintering in Mexico?” They remain quiescent while clustered on oyamel trees. This leads to a low metabolic rate that means that most of the insects don’t need to feed while overwintering. They do drink. In mid-February, the monarchs become more active and mating behavior commences. By the end of February, some begin moving northward. By mid-March, the roost is usually depleted. The butterflies that emerge here in the late summer and fall travel to Mexico and about halfway back in the spring.

The cardinal got its name because it reminded people of the scarlet robes worn by the cardinals of the Roman Catholic Church.

The male wild turkey provides no parental care. When the eggs hatch, the poults follow the female. She feeds them for a few days, but they quickly learn to feed themselves. Several hens and their broods may join into bands.

Place a Garfield suction cup doll on the outside of a window to keep birds from flying into it.

La Nina is the cool phase of the El Nino Southern Oscillation. Water temperatures in the tropical Pacific Ocean fluctuate every 3 to 5 years between the warm El Nino and the cool La Nina. The latest readings show a La Nina. La Nina has widespread impacts around the globe. For Minnesota, the effects of La Nina are most pronounced in winter. La Nina winters tend to be colder than average and are apt to be snowier than El Nino winters.

“Only the mediocre can always be at their best.” — H.L. Mencken.

“The best remedy for those who are afraid, lonely or unhappy is to go outside, somewhere where they can be quiet, alone with the heavens, nature and God. Because only then does one feel that all is as it should be and that God wishes to see people happy, amidst the simple beauty of nature.” — Anne Frank.