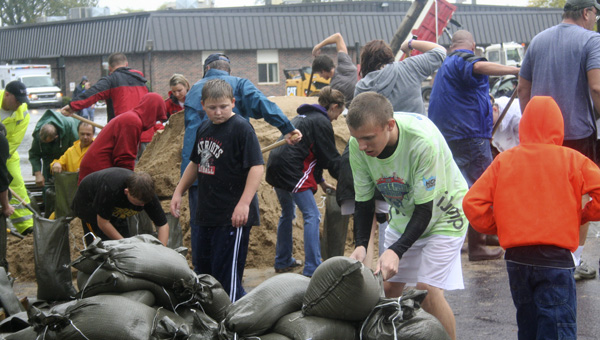 Men, women, boys and girls help fill sandbags Thursday afternoon near the New Richland Care Center as the residents battled rising waters in many places near a creek that flows through the city. -- Michelle Haacke/Albert Lea Tribune

NEW RICHLAND — Residents of the New Richland Care Center were evacuated Thursday afternoon due to rising waters around the facility.

According to Chief Deputy Brad Milbrath of the Waseca County Sheriff’s Office, the evacuation began at 12:30 p.m. He said 48 residents were evacuated to other cities. 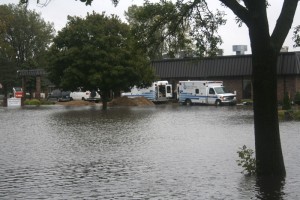 Ambulances and other vehicles line up beside New Richland Care Center on Thursday in an effort to evacuate the premises as a result of flooding. --Michelle Haacke/Albert Lea Tribune

An hour after the evacuation began, area volunteers, firefighters and rescue personnel began sandbagging. Many of the volunteers were students at New Richland-Hartland-Ellendale-Geneva High School.

Waseca Fire Chief Gary Conrath estimated about 50 volunteers and 30 area fire personnel had pitched in to help with the efforts, as of Thursday afternoon.

“We’ve had a lot of the high school kids come down to help,” he said.

More help was expected to arrive. A call for assistance went out to emergency personnel in the region around 3 p.m., and another request for help went out at 6:20 p.m. Geneva called its firefighters to the fire hall at 5:30 p.m. with plans to help with filling sandbags into the night.

A tributary of Boot Creek flows through the city. The sandbagging was an effort to prevent water from the stream from doing damage to property. 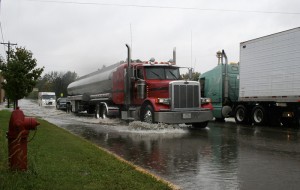 New Richland-Hartland-Ellendale-Geneva High School was dismissed at 1:30 p.m. because of road concerns and water in the locker rooms. More than a foot of water rushed over Second Street in front of the school, between Broadway and Ash streets, making driving nearly impossible and slowing drivers down to a snail’s pace.

According to Conrath, sandbags would need to be stacked a couple of feet higher than the level of the water. With reports that more rain was on the way, Conrath said, “We could be here awhile.”
“We got the residents out, so that’s the biggest thing,” he said. 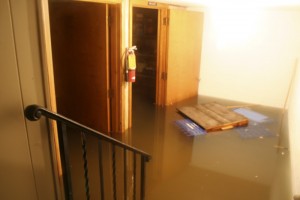 Water fills the basement of Trapper's Lanes on Thursday in New Richland. The owner had pumps working to get the water out. -- Michelle Haacke/Albert Lea Tribune

Waseca County Public Health was also on the scene, helping register volunteers from the incident command unit, a trailer used at such emergencies.

Just a block down the street, playground equipment, picnic tables and benches at New Richland Park were partially immersed in water.

Across from the park, Randy Dokken, owner of Trapper’s Lanes, was trying to pump more than four feet of water from the basement of the bowling alley. He had five sump pumps running.
“Let’s just say you can’t walk down there without waders anymore,” he said.

The alley was nearly completely surrounded by water outside. He estimated about $5,000 in damages in the basement but was more concerned about the back end of the alley upstairs.
“I get another foot, and this place is gone,” he said.

As of Thursday afternoon, Minnesota Highway 13 north was down to one lane at the bridge near the junction with Highway 30, and many of the streets were water either fully or partially covered with water.