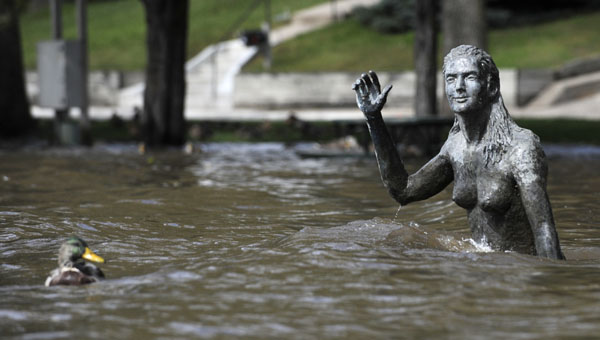 A mallard swims near the mermaid statue at New Denmark Park on Friday. Water is over the banks on Fountain Lake in Albert Lea. -- Tim Engstrom/Albert Lea Tribune

Katherine Island in Albert Lea this weekend is 95 percent submerged, with only the bridge landing above water. The mermaid at New Denmark Park is submerged up to her torso, and Fountain Lake is out of its banks, with one spot of the lake even reaching the sidewalks in the park.

Waters are so high fish were being forced upward out of drains. Readers let the Tribune know about fish in the downtown McDonald’s parking lot. The area between Bridge Avenue and Main Street is an isthmus between Fountain and Albert Lea lakes, often the most water-soaked part of the city. The fish were a reminder that drains lead to local waters.
Many Albert Lea streets were closed with water over the roadway, such as Lakeview Boulevard near Edgewater Bay. 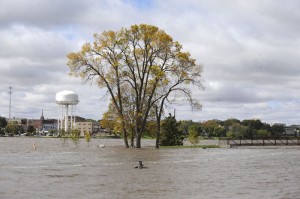 All of Fountain Lake's Katherine Island but the bridge landing is under water Friday afternoon. -- Tim Engstrom/Albert Lea Tribunehttps://www.albertleatribune.com/wp-admin/post.php?action=edit&post=36887

A flood warning from the National Weather Service was extended to 2:30 p.m. Saturday (though it could have been extended again after the Tribune’s press time). Minnesota counties in the flood warning are: Blue Earth, Brown, Faribault, Freeborn, Goodhue, Le Sueur, Martin, Nicollet, Rice, Steele, Waseca, Watonwon and the southern portions of Dakota and Scott.

Interstate 35 south of Owatonna closed early Friday because of high water. According to the Minnesota Department of Transportation, it reopened Friday afternoon.

MnDOT continues to advise motorists to use caution in southeastern Minnesota due to flooding. Several highways have water over the road and some are closed at this time.
A wind advisory was effect in Freeborn County and much of the area until 1 p.m. Friday. Sustained winds reached about 23 mph around noon in Albert Lea. The biggest gusts have reached 35 mph, around 9 a.m. Friday.

Matt Levorson of the Freeborn County Sheriff’s Office issued a no-wake alert for Fountain Lake because of high water levels.

He said the restriction will probably be in place for a couple of days. He advised people to get their boats off the lake, if possible.

The Minnesota Department of Transportation is closing some roads north of Mankato because of the rising Minnesota River. 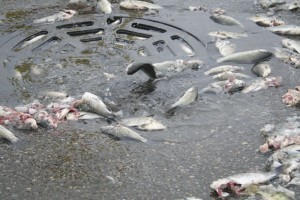 Fish were pushed up through the drain in McDonald's parking lot on Saturday in Albert Lea. -- Michelle Haacke/Albert Lea Tribune

Arndt said other roads were likely to be closed later, including Highway 99 east of St. Peter and Highway 93 between LeSueur and Highway 169.

As of midday Saturday, other closed highways in southern Minnesota were Highway 250 between Highway 30 and Highway 16 near Lanesboro, Highway 3 between Dundas and Faribault, Highway 19 in Northfield over the Canon River, Highway 20 from Highway 19 to Goodhue County Road 86 in Cannon Falls, Highway 52 northbound near Pine Island, Highway 60 west of Zumbro Falls, Highway 63 in Wabasha County, Highway 74 from County Road 30 to Weaver, Highway 105 between Mower County Road 5 and Mower County Road 6.
U.S. Highway 218 at Highway 14 in Owatonna was closed but reopened Friday.
Floodwaters covered some parts of the Carleton College campus in Northfield after the Cannon River spilled over its banks.

Water gushed on to the football field and into equipment rooms Friday morning, sending coaches scrambling to salvage what they could. Nearby practice fields were also flooded.
Thirty students were evacuated from their dorm rooms.

Northfield has declared a state of emergency, which extends through Sunday, and several roads and bridges in the Northfield area are closed.

Gov. Tim Pawlenty toured three of Minnesota’s hardest-hit towns on Friday — Truman, Pine Island and Owatonna, a town of about 24,000 about 65 miles south of Minneapolis. Pawlenty pledged to work with legislative leaders for a possible special session to approve money for the flood damage.

“These communities may be physically damaged, but their spirit is strong,” Pawlenty said.
About 70 homes were evacuated in Owatonna, and about one-third of the city lost power for a few hours Friday morning. About 50 miles to the east, all 180 people were evacuated from the small town of Zumbro Falls. More than a dozen homes near a dam in the small town of Oronoco were evacuated Friday for fear that torrential rains had weakened the dam. At least 10 school districts in the region canceled classes.

The National Weather Service forecast for Sunday calls for sunny skies, with a high near 62 and a calm wind. Monday is to be sunny, with a high of 66. By Wednesday, the high expected to reach the mid-70s. Perhaps the dry week will allow time for the region to recover.