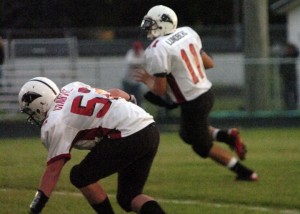 After a touchdown from Blooming Prairie quarterback Luc Zellmer to Cooper Nelson that made the game 20-18, The Blossoms attempted to tie the game at 20 with a two point conversion.

With the snap, Zellmer rolled out to his left and found no one but a group of Panthers defenders, who took him down to protect the two point lead and eventually the game.

“Huge win for our team. Huge,” NRHEG coach Dan Stork said. “For the most part our kids did a really nice job. Especially in the passing game picking up the blitz and giving Sam enough time to throw.”

While the Blossoms are known for their spread offense and throwing the ball, it was the Panthers ability to stop the Blooming Prairie running game that was key.

Along with stopping the running game, the Panthers also got pressure on Zellmer that forced the quarterback to scramble and throw on the run.

“That was our goal to begin with,” Stork said. “We know Blooming Prairie is a a spread team, but first and foremost they want to run the ball. We just knew that if we didn’t stop their run, they would be able to pass the ball all over the place. So that was our focus in preparing for them.”

Although it was the Blossoms who scored first when Michael Thomas scored on a three yard touchdown that put Blooming Prairie ahead 6-0.

NRHEG responded on the very next drive when the Panthers used a 37 yard run by running back Geoff Ramaker to get deep into Blossom territory.

Lundberg struck again for the Panthers in the second quarter when he found David Lassahn for a 19 yard touchdown that put the Panthers up 14-6.

On the very next series, it was the Blossom that responded when Luc Zellmer found Michael Thomas for a seven yard touchdown that brought Blooming Prairie within two at 14-12.

The score would remain 14-12 until the fourth quarter when Panther running back Geoff Ramaker took a handoff 53 yards for a touchdown to give NRHEG a 20-12 lead with 3:56 to go.

The Blossoms then used a Zellmer touchdown pass to Nelson that cut the lead to two before a failed two point attempt allowed the Panthers to run the clock out.

Sam Lundberg, in his first varsity start at quarterback, had two touchdowns on the night and looked ready for the role.

“I can’t say enough about Sam,” Stork said. “He had a big game tonight. He made some incredible throws and read the defense well and took what the defense gave us.”

With the win the Panthers now look ahead to next week as NRHEG travels to Wells to play the Rebels.

The Rebels won the conference last year and will be looking for their first win of the season.