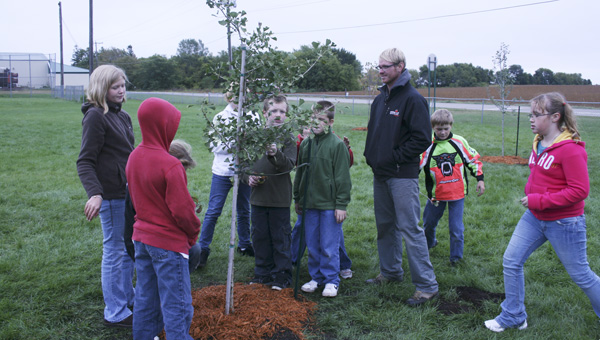 ELLENDALE — Over 60 fifth-grade students at New Richland-Hartland-Ellendale-Geneva Elementary School in Ellendale got down and dirty Thursday as they planted three ginkgo trees on the school’s playground as part of the the statewide Green for Life campaign. 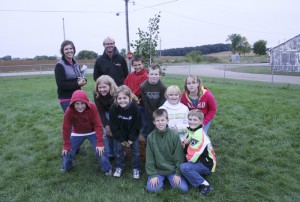 This was the exact lesson that Angela and Alex Bell, owners of Sequoia Landscape Co., hoped the students would take from the tree planting project when it donated the trees as part of the statewide campaign initiated by the Minnesota Nursery and Landscape Association.

“We’re really pleased with the response,” Angela said. “We want to help them celebrate being green for life.”

She said that over the past decade, she has noticed an increase in the sale of trees because of their positive benefits.

“The utility and cost savings for homes is definitely beneficial,” she said, noting an average family can cut air conditioning costs in half by planting three trees that provide shade on the exterior of the house.

Faculty members at the school said they have noticed that today’s students are very in tune to the benefits of a clean environment.

“Students are much more into recycling now than in the past,” said fifth grade teacher Terri Engel. “They talk about it and remind their parents to recycle, things like that.”

“It’s really becoming a part of their lives,” she said. “It wasn’t with us. We had to be taught, but they know how to do it.”

Staffers at the elementary said that over the past decade, the school has initiated several recycling-type programs, including paper recycling in the classrooms, the Girl Scouts’ buckets to collect plastic bottlecaps, guest speakers in the classrooms, and the PTOs can collection fundraisers.

These fifth-grade students will be responsible for watering, pruning and mulching the three newly-planted ginkgo trees this year and next, until they advance to the seventh grade.

More than 100 schools across Minnesota reportedly participated in this first annual statewide event.