Patriot Tour rolls in and out 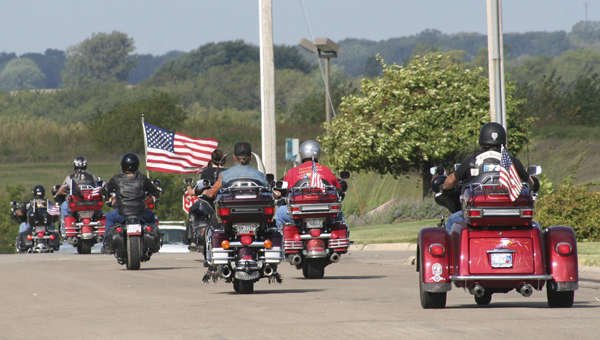 Nine motorcycle riders take off for Waukon, Iowa, with the American flag from Bergdale Harley-Davidson in Albert Lea as participants in the 2010 Patriot Tour. A 100-day tour started on May 28 to honor America’s armed forces. -- Ashley Stewart/Albert Lea Tribune

Nine riders gathered at the Bergdale Harley-Davidson dealership in Albert Lea to finish the “tail end” of the 2010 Patriot Tour, a tour that involves more than 100 Harley owners groups and patriotic Americans from coast to coast.

The flag was delivered to Albert Lea from Eden Prairie Monday and was transported by the riders to Waukon, Iowa, Tuesday afternoon, the flag’s last destination before returning to its home in Wisconsin this Saturday. 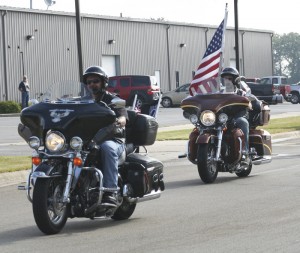 Flag bearers Stan Westland and Axel Hanson lead the group of riders on their 130-mile ride to deliver the flag to its destination in Iowa. Westland and Hanson were both required to take an oath in order to take responsibility of the flag’s transportation. -- Ashley Stewart/Albert Lea Tribune

The 2010 Patriot Tour’s mission consists of passing an American flag over a span of 14,000 miles through the 48 continental states over 100 days to honor America’s armed forces — past, present and fallen.

With each transfer of the flag to another Harley group, a Rolling Stones bag is passed along too, including an American flag that was flown over Afghanistan and Iraq, a Nation of Patriots book that has been signed by each participating rider and other keepsakes and notes of appreciation given by families of veterans,

“It’s amazing how well the flag is holding up,” said Axel Hanson, a flag bearer on the Albert Lea to Waukon route. “Even though it’s it’s a little ragged, it still stands pretty well with all the miles it has traveled.”

The tour was created by the Nation of Patriots in 2008 and put on two consecutive Patriot Tours. The organization was formed to provide financial support to the families of wounded men and women that volunteered their lives in serving the United States and its citizens.

For more information or pictures about the 2010 Patriot Tour, visit www.nationofpatriots.org.