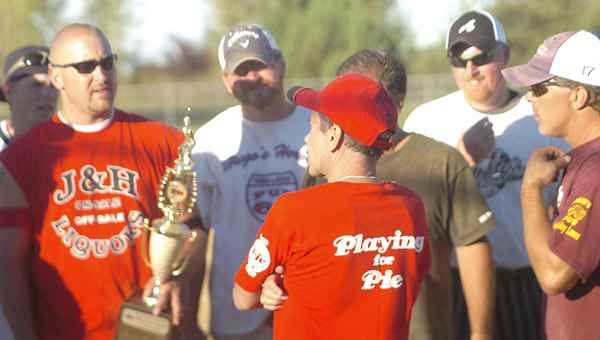 Three years after the death of his son, Ryan, Scott Truesdell no longer sees the annual sports weekend dedicated in his boy’s memory as an emotional event.

“It’s a feel good weekend,” Truesdell said. “It’s healing and it’s good to talk about (Ryan). As long as you keep his name out there the memory stays alive and that’s what this is about.”

Truesdell admits that the first Memorial Sports Weekend, held nearly one month after Ryan’s death, was tough but has gotten easier because of what it symbolizes and brings to the community.

“It’s like a family get together,” he said. “It’s great to see Ryan’ friends because some of them I only see this one time a year. We get to talk about Ryan and it’s all positive.”

The only place Truesdell does get emotional over his son’s death is Hayek Field because there are so many memories of Ryan there, of when he played baseball for the Tigers.

That’s also where he was best known by his nickname — Pie.

He does this type of donating in lieu of a memorial scholarship because he can affect more people.

“I can do more good this way,” Truesdell said.

Ryan, who was a Big Nine All-Conference baseball player, began playing softball with friends during the final year of his life.

Most of his former teammates were on the Aragon Bar team that finished in second place.

As the softball tournament keeps growing, expanding from 20 to 22 teams this year, Truesdell hopes teams sign up early so more teams can play. He also plans on moving the golf tournament, which was held at Saturday at Green Lea Golf Course, to Sunday to accommodate more golfers.

Ryan Truesdell died tragically on Aug. 14, 2007, after becoming trapped in a steel grain bin at the Glenville Grain elevator. He was 20 years old, and about to start another semester at Rochester Community College, where he played baseball.