Police get rid of drugs 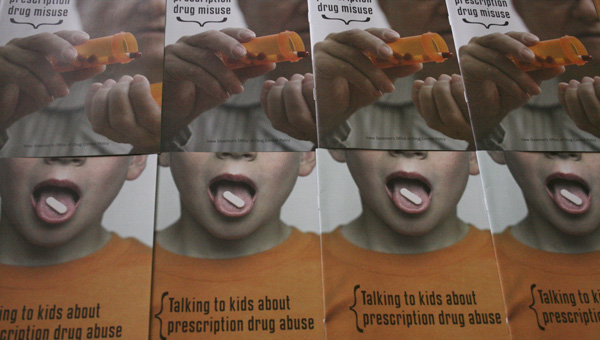 Brochures on a table Saturday in Lake Mills, Iowa act as a guide for parents to talk to kids about prescription drug abuse and to approach adults about drug misuse. -- Michelle Haacke/Albert Lea Tribune

LAKE MILLS, Iowa — Residents in Lake Mills were cleaning out their medicine cabinets on Saturday.

It was the town’s first ever “Clean Out Your Medicine Cabinet” event, sponsored by the Lake Mills Task Force Against Substance Abuse and the Lake Mills Police Department.

The event was held in conjunction with the nationwide prescription drug take-back day, spearheaded by the federal Drug Enforcement Administration. 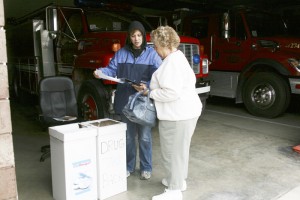 According to Shawna Eastvold, coordinator for the Lake Mills task force, the purpose of the event was twofold.

The event provided the opportunity for locals to safely dispose of their unused medications. And it brought awareness to prescription and over-the-counter drug abuse and misuse, which Eastvold said has become a big problem in the Lake Mills area.

“With youth, its a scary thing, because they don’t know what they’re taking,” Eastvold added. “Russian roulette is what you can compare it to.”

Sgt. Todd Thorson of the Lake Mills Police Department was manning the box where the unwanted medications were being collected. He said he’s seen quite an increase in cases involving prescription medications over the past two years.

He said accessibility, perception that these drugs are not harmful and websites showing people what drugs to use to get high are a few reasons for this increase.

Another problem they cited was misuse of pharmaceuticals. Eastvold said adults accidentally overmedicate or simply take medicines for the wrong reasons. Mixing potentially dangerous prescriptions taken for different ailments is yet another danger.

Saturday’s event drew more than 25 people who dropped off hundreds of expired and unused prescription and over-the-counter medications. Most of those people simply hadn’t known what to do with their old medications.

One man, who wished to remain anonymous, dropped off a plastic grocery bag full of medications that had been prescribed as far back as four years ago. Not knowing what to do with them, they had collected in his medicine cabinet.

“They were way up high but the grandkids can still seem to get what they want, if they want it bad enough,” he said. 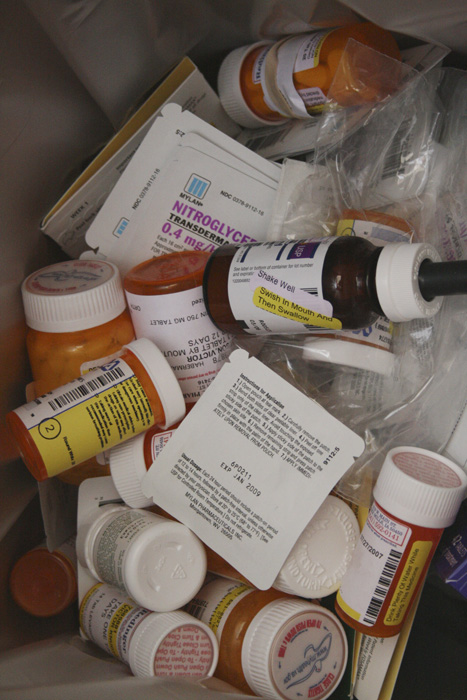 Prescription drug abuse is gaining widespread attention, evident in a press release distributed on Sept. 22 from President Barack Obama’s administration. The report stated that for people ages 12 and older, the 2009 estimate of nonmedical users of medication is up 20 percent from 2002.

Members of the Freeborn County Drug Education Task Force have discussed prescription drug abuse and safe disposal at recent meetings. On Friday, the Freeborn County Partners in Prevention, Drug Education Task Force, Fountain Centers and Albert Lea Medical Center collaborated to host a free presentation for the public with prevention coordinator Jay Jaffee of the Minnesota Department of Health. The presentation focused on prescription and over-the-counter drug use, misuse and abuse.

“It’s become well known people are given narcotic prescriptions like candy. We see teens borrowing pills from parents and grandparents,” he said.

Alice Englin of the Freeborn County Partners in Prevention cited a 2007 Minnesota Student Survey, which reported that in Freeborn County, 8.5 percent of 12th grade students reported using OxyContin, Percocet, and/or pain relievers at a rate of 2 percent higher than the state average.

Englin said the local task force is working on implementing a permanent prescription and over-the-counter take back program by the end of the year.

“It’s about safe use, safe storage, safe disposal,” she said. “We want people to use it correctly and not share it, store it safely and dispose of it safely.”

Disposing medications incorrectly can have a negative impact on the environment. 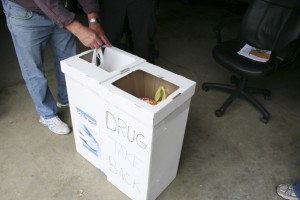 While flushing medications is acceptable for some types of drugs, others can get in the drinking water, causing harmful side effects to people and animals.

“For many years people were told by their doctor or nurse to flush old meds down the toilet. This is the worst possible disposal scenario because waste water treatment plants are not designed to ‘treat’ drugs or pills,” said Freeborn County Environmental Services Director Randy Tuchtenhagen.

He said that waste water treatment facilities depend upon bacteria to “treat” the sewage and make it sterile before it gets into the ground water or rivers, lakes or streams.

“If we put pharmaceuticals into the waste treatment system it could kill off the very treatment process we depend upon to neutralize the waste,” he said. “Traces of improperly disposed drugs are showing up in fish and other aquatic life all over the United States at alarming levels.”

Eastvold recommended talking with pharmacists and doctors about the correct way to dispose of unused medications. At the very least, she said, keep your medications locked up.

Thorson warned of theft by throwing old medicines in the trash. “You don’t realize how unsecure your garbage bags are once they leave the curb,” he said.

Tuchtenhagen said placing drugs and pills into the garbage is an acceptable method of disposal, as long as those drugs are altered. He recommended altering medications with vinegar, pepper or some other “foul” mixture, so that a person searching for drugs does not find those medications in the trash and try to use them.

He also said to triple bag the mixture in zip lock type bags before disposal.

Winkels also recommended people to opt for alternative medications, especially when a narcotic is prescribed. “We’re seeing narcotics prescribed for minor things,” he said. “Ask your doctor if you really need this OxyContin for a toothache, or can you take Tylenol.”

After the event in Lake Mills, Thorson said the medications collected would be locked up in police custody until the DEA could collect and destroy the drugs, most likely by incineration.