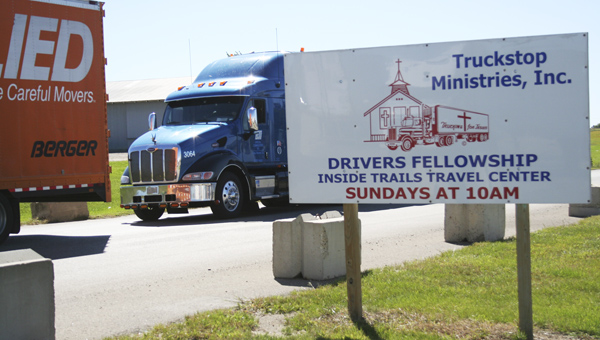 The Truckstop Ministries Inc. sign is the first sign truckers see while pulling a big rig into the truck and trailer driveway at Trail’s Travel Center in Albert Lea. -- Michelle Haacke/Albert Lea Tribune

When pulling a big rig into the truck and trailer driveway at Trail’s Travel Center of Albert Lea, the first thing the driver sees — before the truck wash and oil change specials — is an invitation to Trucker’s Fellowship ministry services each Sunday morning.

In addition to the other conveniences of home that cross country drivers seek out, including shower and laundry facilities, wireless Internet and homestyle meals from the cafe, Trail’s started offering faith services about two years ago. 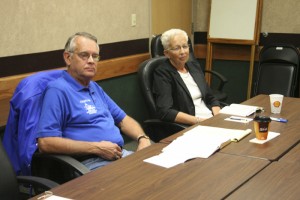 “The Truckstop Ministry Services held each Sunday morning in the Trail’s Travel Center conference room are just one more way that we are working hard to meet and exceed our customer’s needs and expectations,” said Trail’s owner Rocky Trail. “We receive so many comments from truck drivers expressing how much appreciation they have for us offering this service since it’s hard to attend church regularly when you are a truck driver.”

“The biggest problem with over the road drivers is the loneliness,” said Chuck Avery of Albert Lea, a chaplain for Truckstop Ministries. “They’re away from home for five to six weeks at a time. Their trucks have all of the modern conveniences of home, but they don’t have their families.”

Trail’s partnered with Truckstop Ministries of Jackson, Ga., and began offering the services in July 2008. Over the past year alone, Avery said he and seven other area chaplains have ministered to 225 drivers from across the United States and Canada. “It’s not just for truckers,” Avery said. “It’s aimed at truckers but we never turn anyone away. We get travelers, too.” 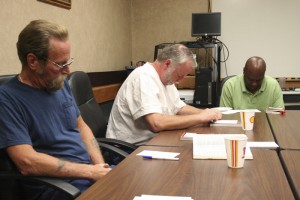 Avery is a layperson who became a chaplain for Truckstop Ministries in March 2008. He’s always had a soft spot for over the road drivers, as his father dabbled in trucking and he was a UPS driver for many years. His wife, Connie, serves as his assistant chaplain, and together they conduct the services about once every two months, rotating Sundays with seven other husband and wife teams from Albert Lea each week.

On their designated Sundays, the Averys arrive at Trail’s at about 8 a.m. to prepare for that morning’s service. They spend the first 30 minutes canvassing the parking lot, sliding flyers into driver’s side truck doors to let the drivers know about the fellowship. “We usually figure we distribute at least 100, sometimes 125. It was pretty full this morning,” Chuck said last Sunday morning.

When finished distributing their leaflets, they head inside Trail’s to the conference room, located down a quiet hallway near the drink coolers. Connie begins brewing fresh coffee and puts together a plate of goodies (that week it was doughnuts) while Chuck sets complimentary New Testament/King James Version bibles around the table. “We set those Bibles out, but they usually come with their own,” he said.

At 9:30 a.m., they officially open the door to those wishing to share in their worship session. “Our services are transdenominational,” Chuck said. “They want everyone to be comfortable in our services.”

“But it’s really more like a Sunday school class than a formal service,” said Connie. “We try to get a lot of interaction. It’s pretty informal.”

Shortly after opening the door, Roy Rife from Buckeye, Ariz. walked in, Bible in hand. He is typically on the road and away from his wife for three to four months at a time. “It’s not bad this time,” he said. “It’s been about a month since I’ve been home.”

For Rife, who’s spent the past 20 years as a company driver, last Sunday offered a nice change of pace. “I try to go to church when I can, but the opportunity doesn’t always present itself,” he said.

Jim McCool was eating breakfast in the cafe when he heard the announcement over the loudspeaker, and joined the group shortly before the service started at 10 a.m. An independent truck driver from Western Tennessee, he said that something inside told him he needed to attend services that morning. “Every day I lay my heart, my mind and my soul to the Lord,” McCool said. “He guides me. I really hold on for that guidance.”

After introductions and cups of coffee were topped, Chuck opened the fellowship with a prayer and a reading from the Book of Romans. A lively discussion about the word righteousness followed before Ronald Bass of Memphis, Tenn., joined the group. A husband and father of six children, Bass said he felt he needed to attend because, “my cup full of wrong things needs to be emptied and filled with right.”

An hour later, the Averys wrapped the services with a final prayer. The drivers shook hands and filed back into the main area, continuing their discussions.

Although the service on Sunday brought only three drivers, Chuck said any given session usually has an attendance of six to 12 people, sometimes fewer and sometimes more. “There’s only one Sunday in two years where we’ve had no one,” he said. “Even if you only have one, it’s worthwhile because you’re making a difference.”

“It’s great to know we are filling a need and making a difference in their lives,” said Trail. “Creating ‘home away from home’ experiences for these hard workers is priceless.”