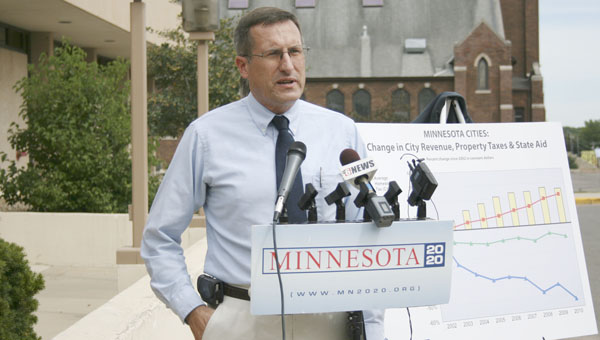 Albert Lea Mayor Mike Murtaugh speaks outside of Albert Lea City Hall Wednesday afternoon during a press conference about a new report released by nonpartisan think tank Minnesota 2020 about the effects that state funding cuts have had on property tax increases on the local level. -- Sarah Stultz/Albert Lea Tribune

Cuts in state funding to the city of Albert Lea, Freeborn County and the Albert Lea School District since 2002 have contributed to an overall 97 percent inflation-adjusted rise in the average homeowner’s local property taxes in Albert Lea, according to a new report released Wednesday by St. Paul-based think tank Minnesota 2020.

During a press conference Wednesday outside of Albert Lea City Hall, Jeff Van Wychen, author of the report, asked that the next governor and Legislature develop a revenue plan that phases out reliance on regressive property taxes in favor of more progressive state level revenue generation.

“Unallotments and cuts in revenue sharing due to ‘no new taxes’ policy, not local government spending growth, have led to these statewide property tax hikes,” Van Wychen said. “In fact, local governments have done a better job at belt tightening than the state.”

He said, since 2002, Minnesota cities have cut spending by 15 percent, including inflation.

“For eight years, the state has passed its budget problems onto local governments, forcing mayors, city councils and school boards into making tough choices. This is not a path to prosperity for Minnesota,” said Minnesota 2020 Executive Director John Van Hecke in a news release. “Minnesota works best when the state pools resources so that all communities benefit, not just a select few.”

Albert Lea Mayor Mike Murtaugh said the residents of Albert Lea have felt the impact of state cuts to the city.

He gave just a few examples where the cuts have impacted residents, including the closing of the public library two days a week and closing the city pool for more hours.

He said the city is struggling to remain competitive in attracting families and businesses to Albrt Lea. Because of that, he said, it is important to meet with the gubernatorial candidates and find out where they stand on the issue.

Looking ahead to the 2011 budget, he said the city is facing some of the same questions it did last year when it set its 2010 budget, including questions about whether to keep the library closed two days per week and regarding hours for police officers.

“We’re faced with a wait-and-see situation again,” Murtaugh said, noting that it is difficult to plan a budget without knowing if the Legislature may implement some last-minute cuts.

Add that to the possibility that the country is facing a double-dip recession.

“What does that mean to local taxpayers?” Murtaugh said. “How much more can we bear to ask our citizens?”

City employees are also stressed with having to perform the same services with fewer resources, he said, noting that the city has gone from 150 full-time employees to 135 in 2010. City staff are still getting things done, but just not as fast.

Van Wychen called this a “pay more, get less” approach.

He said when people are paying more in property taxes they expect to get more, but in this case they are not.

On top of everything else is a proposed Alliant Energy rate hike, Murtaugh said, which the city has stepped up to oppose.

He said he has never stated that local governments can’t be part of the solution to fixing the state deficit, but that cities need to know they have state support.

In his report, Van Wychen said Minneota needs “more progressive tax policy which doesn’t stick those least able to pay with a disproportionate share of the bill and that doesn’t force local councils, commissions and school boards to slash critical public investments.”