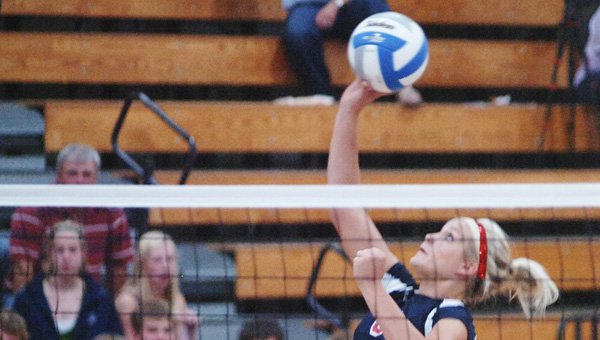 USC’s Val Sahr drops a shot over the net against the Tigers Monday in Albert Lea. -- Jon Theuer

Overbo, USC perfect from the service strip in win

“We needed this win,” USC head coach Jolene Bute said. “Every night we go out and play ball, every game is important to us. Even if it’s a non-conference game, it’s still important for us. Our goal was to win in three games and we got the job done.”

For the Tigers, Albert Lea head coach Jaimie Mauseth said it was a frustrating night for the Tigers. 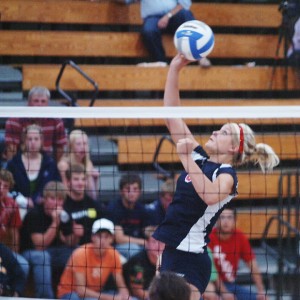 USC’s Val Sahr drops a shot over the net against the Tigers Monday in Albert Lea. -- Jon Theuer

“I think we come out there and think we can do it, then we mentally break down,” Mauseth said. “USC started to get some runs and then they got frantic about it. That first game I think we really should have had. It’s just about finishing the game and really wanting it.”

The Rebels did a fantastic job from the service line all night as they didn’t miss a serve.

“We were 100 percent serving on the night so thats a bonus,” Bute said. “There is really no reason to miss a serve. You’re back there by yourself, you’ve got to do your job and they did.”

While the serving was on, so was the play of the USC frontline.

Val Sahr, Kayla Stenzel and Danielle Koestler combined to have 13 kills on the night.

“We have our blonde wall in Sahr and Stenzel. Then we had some great plays by our setters. Also Allie Voigt did a great job getting her blocks up there, too.”

While Albert Lea was competive in the first two games, USC came right out of the gate and took game three from the Tigers right away.

“Everything was just not working at all,” Mauseth said. “We needed a girl to step up for the team and no one did. There was times we fought hard to get the ball back and we served it right into the net.”

USC is back in action on Tuesday as they host Bethlehem Academy, who is the defending state champions from last season.

Albert Lea is off until Thursday when they play Mankato West.