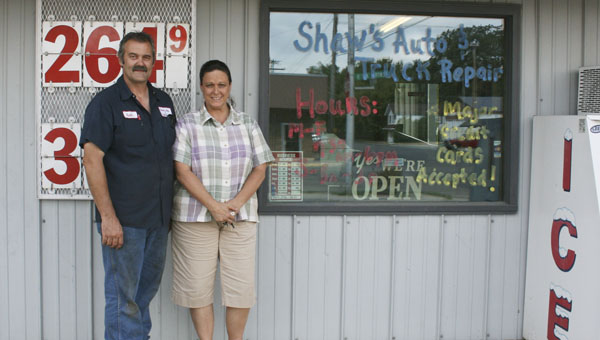 Keith and Tracy Shaw stand in front of the store they own in Geneva. The couple said the community has been very welcoming. -- Kelli Lageson/Albert Lea Tribune

On the Road: Residents of Geneva happy to have service station again

GENEVA — Residents of this town have been using the services provided at Shaw’s Auto & Truck Repair since it opened in April.

Before April the gas station and auto repair shop had been closed for a year. It is the only place in Geneva with fuel, so residents appreciate having it open. Shaw’s is located on Central Avenue North in Geneva.

Keith and his wife, Tracy, both own and manage the store and repair shop. They live in Albert Lea and had opened a similar shop in Ellendale before they found out about the location in Geneva. 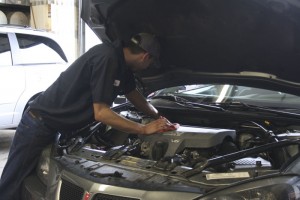 Cody Boverhuis, an employee at Shaw's Auto and Truck Repair in Geneva, works on a car in the shop on Tuesday. The Shaw's have owned the store and repair center since April. -- Kelli Lageson/Albert Lea Tribune

“The locals enjoy having gas back in town,” Tracy said. “We’ve been very busy.”

Along with Keith, there’s one full-time mechanic, Cody Boverhuis, and the couple’s son, Tyler, works part-time in the shop. Tracy said Keith has been a mechanic for at least 25 years and was also previously a Snap-on dealer. She said he likes owning his own business and that the community has welcomed the addition.

Services available in the repair shop include all kinds of maintenance like oil changes, brake repair, engine repair, air-conditioning services and tire repair. Keith said he cannot do transmission repair, though he can do maintenance services.

“We have a pretty good selection of parts on hand,” Keith said.

He also said he gets his parts primarily in Albert Lea, Wells or Owatonna. For fuel the station has unleaded gasoline and diesel. Keith said the pumps do not have a pay-at-the-pump option, and they won’t in the near future. They do take major credit cards inside the store. In addition to fuel, the store sells beverages, snacks, candy and some automotive maintenance products.

Keith said the repair shop is a NAPA-certified auto care center. The store is open from 7:30 a.m. to 6 p.m. Monday through Friday and from 8 a.m. to 1 p.m. on Saturday. It’s closed on Sundays and holidays. Tracy said they’ve thought about moving to Geneva and probably will someday.

“We like the community,” Tracy said. “They’re so welcoming.”