The funeral service for Robert “Bob” Eugene Herdina, of Albert Lea, will be held at 10 a.m. on Saturday at Salem Lutheran Church. The Rev. Rolf Wangberg will officiate. Interment will be in Hillcrest Cemetery. Visitation will be from 4 to 6 p.m. on Friday at Bonnerup Funeral Service, Albert Lea, and one hour before the service at the church. 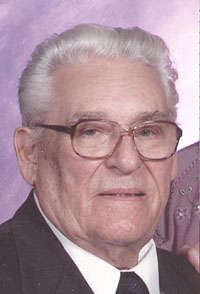 He was born on July 29, 1925, in Blooming Prairie, the son of Henry and Caroline (Blazek) Herdina.He attended Blooming Prairie Schools and then worked on the family farm near Blooming. In 1945 Bob was drafted into the U.S. Army where he served in Berlin, Germany, in occupation forces until his honorable discharge in 1946. When he returned from the service Bob began working at Wilson and Co. where he worked for 38 years before retiring in 1983. Bob was united in marriage to Laurel (Jensen) Lahs on Jan. 5, 1952, at Salem Lutheran Church. Bob had been an avid hunter, especially enjoying fox and deer hunting. He enjoyed fishing as well. He was a member of Salem Lutheran Church, the Moose Club and was active at the Union Center.

He was preceded in death by his parents and his father-in-law and mother-in-law, Chester and Olga Jensen.

“Big Bear” and “Paul Bunyan” as his grandkids affectionately called him will be greatly missed by his family and many friends.