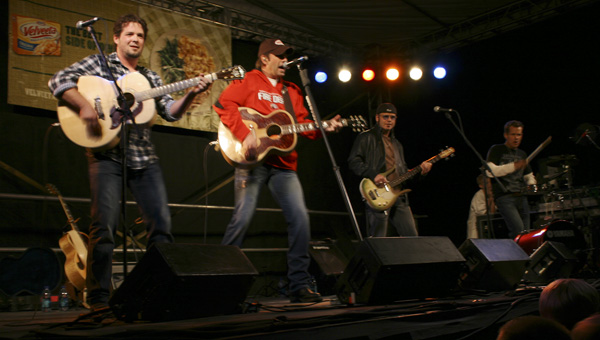 Rodney Atkins, in a red sweatshirt given to him by the New Richland Fire Department, sings with his band during a concert Monday evening. He played many of his hits and started the concert with “It’s America.” -- Kelli Lageson/Albert Lea Tribune

NEW RICHLAND — One local country fan was able to invite family and friends to attend a private concert with country music star Rodney Atkins after winning a national contest.

Corrine Schuller, of New Richland, stumbled across the contest online this summer and decided to enter. She described activities her family did while spending time together and wound up in the top five of entries.

Corrine Schuller poses for a photo with country music singer Rodney Atkins Monday near her home. Atkins later performed in her backyard for Schuller and her friends and family. -- Kelli Lageson/Albert Lea Tribune

“Then I pestered everyone on my Facebook page to vote for me,” Schuller said.

And vote they did. Schuller was told about a month ago that she’d be able to invite around 50 of her closest friends and family to a concert in her own backyard. The contest is organized by Kraft’s Velveeta Shells & Cheese, who Atkins has a partnership with.

Schuller said she’s been a fan of Atkins for a few years and a country fan her entire life. She’s a member of his online fan club and has met him briefly a few times before — once in Nashville, Tenn.

“We like almost everything on his album,” Schuller said. 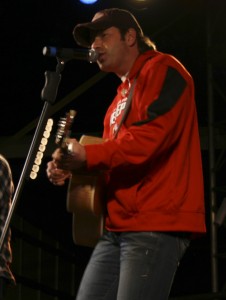 She said she wasn’t nervous about meeting him and was excited to see her son hanging out on the stage during the band’s soundcheck in the afternoon. She mentioned that his song “Watching You” was one of the first ones she liked because it’s about a son learning from his father.

“People that know us, know we like him,” Schuller said.

She also said she hoped everyone she invited enjoyed themselves as well. Schuller, who works for the city of New Richland, invited her family, co-workers, neighbors and friends to the concert on Monday evening. There was also a dinner catered by Blondie’s Grill of New Richland.

She said she had lots of volunteers to help with catering. Organizers of the event needed a local catering place to cater the dinner, and cook the most important item on the menu — Velveeta Shells & Cheese. Solland said everything was going well Monday before the dinner, and she was excited that she was able to help plan the event. 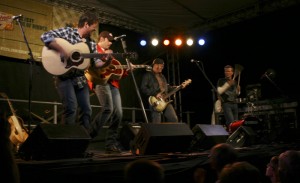 Rodney Atkins, middle in red, and his band play Monday night in New Richland. Atkins said he likes playing laid back concerts like this one. -- Kelli Lageson/Albert Lea Tribune

“Kraft is really, sincerely about getting families together at the dinner table,” Atkins said.

He said as a father it can be tough to get the whole family together for dinner, but it’s something his family tries to do.

One of Atkins’ biggest hits “If You’re Going Through Hell (Before the Devil Even Knows)” reached No. 1 on Billboard’s country music chart in 2006. He also played “It’s America,” and the song he wrote for a Velveeta commercial called “Get Together.”