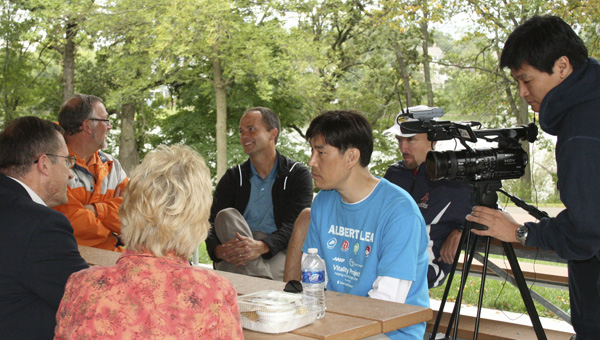 A documentary crew from South Korea traveled all the way to Albert Lea last week on a quest to find out more about the AARP/Blue Zones Vitality Project — specifically concerning how to get people walking.

Though project leaders have received numerous calls from cities around the country that would like to implement a similar project, this was perhaps the first international response received.

Under the direction of Blue Zones founder Dan Buettner, the Vitality Project encouraged people to make simple changes to their lifestyles to live longer, healthier lives.

Chief Producer Sunghwan Hwang with the Seoul Broadcasting System, a national Korean station, said he found out about the Albert Lea project from a Newsweek article that featured the benefits Albert Leans received from participating in the pilot project during 2009.

For part of an SBS documentary about walking, Hwang wanted to come to Albert Lea to find out about the success seen locally.

During a two-day visit to the city Thursday and Friday, Hwang and a cameraman tagged along on a walking school bus to Lakeview Elementary School, interviewed members of a walking moai, interviewed resident Kevin Boyer and met with city, business and project leaders.

Hwang said there are lots of sidewalks in Seoul and people know the health benefits of walking, but the percentage of people who actually do so is low. He wanted to explore if there were ways to motivate people to be active.

During an interview Friday at Pioneer Park, National Vitality Center leaders talked about the policy changes that took place first on a city level, encouraging complete streets and filling in sidewalk gaps.

Albert Lea Community Education Director Chris Chalmers said it has been important to provide as many positive alternatives as possible to people and then let them choose which path they will take.

Another major part about why the Vitality Project succeeded was all of the volunteers who stepped up to make events happen, National Vitality Center ambassador David Larson said.

While official participation in the project may be down in 2010, the message of the project has definitely spread to many people in the community, moai coordinator Nancy VanderWaerdt said. Many people are practicing the themes of the project on their own, with friends or as families.

Albert Lea-Freeborn County Chamber of Commerce Director Randy Kehr talked about how incorporating a culture of walking at work, for example, in turn spread into the other parts of the lives of those workers.

Hwang said he was impressed by the number of people who jumped on board with a walking program at Alliance Benefit Group, but he was disappointed that only 10 percent of children are now walking to school.

Chalmers pointed out that 10 percent is better than the 1 percent who were walking before the project.

Changes are being made a little at a time to undo the past 40 or 50 years of bad health decisions, Murtaugh said.

Albert Lea Community Development Director Bob Graham called the Koreans’ visit to the city as “international exposure to a vitality project that worked.”