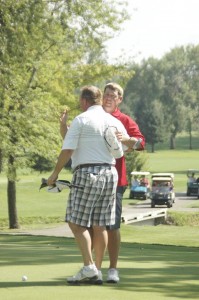 Phil Schmidt hugs Mick Hockinson on the 15th green Monday after he pars and wins the Shortstop Golf Tournament at Green Lea Golf Course, the second of his career. -- Andrew Dyrdal

Standing on the same green he dropped a hole-in-one on the day before, Phil Schmidt parred Hole 15 Monday to defeat Mick Hockinson 4 and 3 to win the 83rd annual Shortstop Golf Tournament. 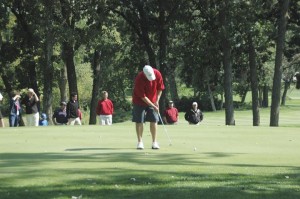 Schmidt putts for the championship on Hole 15 at Green Lea. -- Andrew Dyrdal

Up four holes with four to go, Schmidt needed to halve the hole with Hockinson to win his second career Shortstop title. Hockinson was off the tee first, but landed his ball short of the green on the uphill par-3.

After Schmidt hit his tee shot 15 feet from the cup, Hockinson needed to chip in for birdie to stay alive. His second shot rolled passed the hole and Schmidt two-putted for par and the championship.

“It feels great,” said Schmidt of winning the three-day tournament. “This thing isn’t easy to win. You need to get by a lot of tough matches and play good golf.”

Good golf was the theme of Schmidt’s weekend.

After shooting a two-over par 74 in the qualifying round — the second-best qualifying score of the 128 player field — Schmidt cruised into the quarterfinals of the championship flight and a match against 2005 Shortstop winner, Mike Nelson. 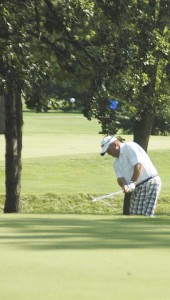 Hockinson chips onto the green on No. 15 Monday. -- Andrew Dyrdal

Against Nelson, Schmidt went two-under on the front nine and six-under through six holes on the back, including a match-winning hole-in-one on No. 15.

Schmidt has his biggest challenge of the tournament Monday morning against Andy Petersen in the semifinals.

Schmidt trailed Petersen after eight holes but sunk a long putt on No. 9 to draw even before the turn. Schmidt then made a 15-foot putt on No. 17 to end the match and advance to the finals.

“It was a grind,” said Schmidt of his back-and-forth semifinal match. “I hit the ball well and made a bunch of putts.”

On No. 10 — a dogleg left par-5 — Schmidt tried to clear water and tall trees but dropped his ball in the drink. Hockinson hit his ball down the middle of the fairway and Schmidt hit his third shot from the drop area.

“I got too aggressive with my line,” Schmidt said of his tee shot on No. 10.

With a chance to gain ground, Hockinson couldn’t get on the green in regulation while Schmidt hit a terrific fourth shot and made a 10-foot putt to save par.

Hockinson got a hole back on the par-4 No. 14 when Schmidt pushed his drive into the rough and a line of trees, and he was able to chip out of the sand trap and a short birdie putt.

Schmidt ended his day on No. 15, though, just as he did the day before.

“I played steady,” Schmidt said of his final match. “I made a lot of putts and played solid.”

With the win, Schmidt was awarded a glass trophy and $500 in Green Lea pro shop credit.