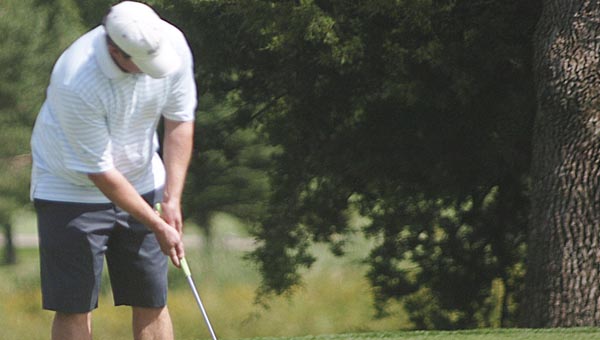 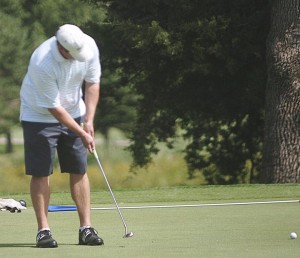 After shooting two-under par on the front nine during the quarterfinals, Schmidt got rolling after the turn, knocking down a par and four birdies before the 15th hole.

To beat Nelson, all Schmidt needed to do was halve the hole, but off the tee his ball took three bounces and landed in the cup.

“It was exciting,” said Schmidt of his second career hole-in-one. “A big adrenaline rush because the crowd was yelling.”

With the ace, Schmidt beat Nelson 5 and 3 and earned a matchup against Petersen this morning for a spot in the championship.

“Phil’s one of the better players in the state,” Petersen said. “I’ll have my hands full.” 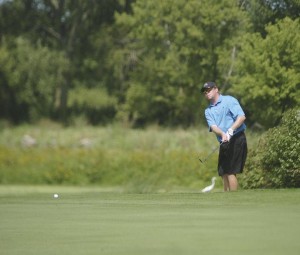 Petersen defeated Brent Miller 2 and 1 in a rematch of last year’s championship match.

“I didn’t make very many mistakes,” Petersen said. “I made a couple birdies and a lot of pars.”

On the opposite side of the bracket as Schmidt and Petersen, was the youngest player in the field, Alex Lair.

Lair, a 22-year-old lefty, defeated Jim Johnson 3 and 2 in a round full of highlights. 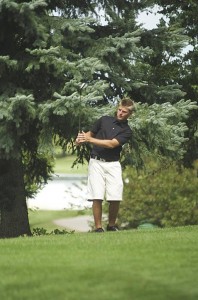 Alex Lair chips onto the green on Hole 2 from beneath a tree Sunday. -- Andrew Dyrdal

“I tried not to make a lot of mistakes,” Lair said. “I kept (the ball) down and hit fairways for the most part. My putter let me down but I came through in the end.”

In this morning’s semis, Lair matched up against Mick Hockinson, who defeated Mark Heinemann 5 and 4.

Hockinson was pleased with his efficiency after beating his opening-round opponent in 13 holes, and Heinemann in 14.

“It was a short day with both of my (matches),” Hockinson said. “I was very fortunate.”

Hockinson, who is an Albert Lea native but traveled to the tournament from his current home in Rockford, Ill., said his goal is to be consistent because that’s what works best for him.

“I try and hit fairways and hit greens,” he said. “And if my putting game is going well I make a lot of birdies.”

Tee off for the championship flight semis was 7:30 a.m. this morning.