The Albert Lea school board discussed federal stimulus money, large class sizes in elementary schools and other issues at a workshop Tuesday evening.

Lori Volz, director of finance and operations for the district, spoke to the board about the 2010-11 federal stimulus entitlement and what it meant for the district. More than $700,000 will be allotted to the district. Up to 90 percent must be spent this school year, and the remaining can be spent in the 2011-12 school year. The money has a stipulation that it has to be spent toward school educators.

“The funds will buffer some cuts,” Volz said. 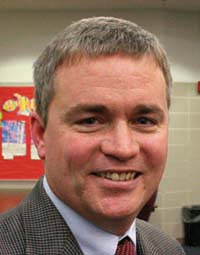 The board will be working on the specific plans in the coming meetings. Volz pointed out that the state Legislature will not be allowed to reduce aid to schools because of this new entitlement.

Because the meeting was a workshop, not a regular meeting, no action was taken.

Another issue facing the Albert Lea School District is overstuffed elementary schools. Superintendent Mike Funk said Hawthorne, Sibley and Lakeview are at or above capacity, and the board will need to make a change for the next school year. He said part of the reason for the space issue is, when schools do not make Annual Yearly Progress scores, parents can then transfer their child to a different school.

“It’s a good issue in some ways,” Funk said about the overcrowding.

He explained that at least the district wasn’t thinking about shutting an elementary school because of lack of students.

“We need to think about what’s best for the kids,” Funk said.

Funk addressed the board about a column published in the Tribune on Aug. 31 by Albert Lea resident David Behling, a professor at Waldorf College, regarding music education at Southwest Middle School. Behling wrote that the community should have had more involvement before the matter — students must now pick vocal or instrumental music or give up another elective — was decided.

Funk said he thought the column was unfortunate and portrayed the issue wrongly. He said he hadn’t heard any issues from parents or teachers at Southwest since Behling’s column was written and that it was one of few options Southwest Principal Marcia Langseth had to reduce class sizes. He also said Langseth called all the parents of children who were affected by the decision and worked with them for solutions. Funk also said he personally talked to teachers and parents who had issues with the changes previously this summer.

“Music education is very important to this district,” Funk said.

The board also discussed appointing computer consultant Jeshua Erickson to the seat vacated by Bill Villarreal because he is currently running unopposed for the seat, and appointing him early would allow him to begin learning and working on the board. After discussion the board decided it would be better to wait until the election in November and then immediately appoint whoever is elected.

Eric Van Brocklin, administrative dean at the Area Learning Center, spoke to the board about online learning as an alternative for some students.

“It’s just another option for kids so they stay in school and stay in the district,” Van Brocklin said.

He said he’d like to provide as many options as possible to accommodate students who have problems with health, transportation or other issues. Van Brocklin said having online learning as an option is one of his goals, and he thinks it will benefit the whole district. The board did not take any action on this agenda item as it is a fairly new discussion.

Funk then reported to the board that first-day enrollment was at 3,289. Incoming kindergartners totaled 253 for this year.