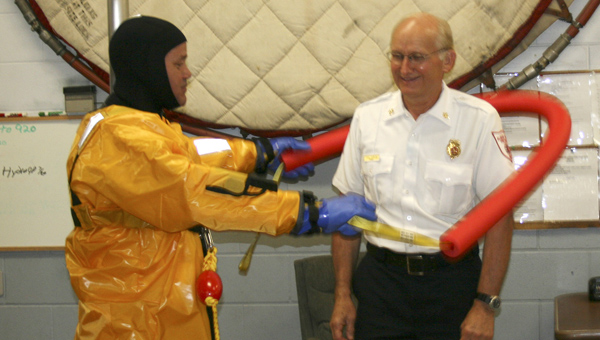 “We’re very excited to receive this equipment,” said Albert Lea Fire Chief Paul Stieler. “This is another good example of how the city and county departments and agencies are working together.”

A Minnesota Department of Natural Resources grant of $5,797 paid for the equipment. 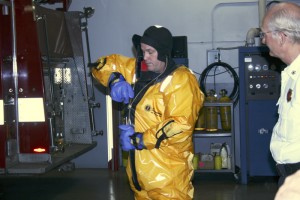 Two cold water reserve suits, called Mustang Suits, along with two floating rescue liners, one safety loop, 11 buoys and a sonar unit to be installed on the Fire Department’s water patrol boat were among the upgraded equipment purchased with the grant dollars.

The Mustang Suits, which cost about $700 each, are all-in-one full body suits made of waterproof material. Heavily insulated with floating abilities, each suit zips up the front, covering the body from head to toe with built-in boots, gloves and a hood.

According to Stieler, the insulation is like that of a diver’s suit, and rescuers wearing the suit could be submerged for anywhere from 45 minutes to an hour and a half, depending on the water temperatures.

“They can stay in a lot longer than people who don’t have them on,” he said.

Large hooks on the front of the suit allow the resuer to attach a safety loop, which is placed around the drowning victim, to help bring the victim to safety. Retractable ice picks on a rope, placed around the rescuer’s neck, assists the rescuer in emerging from the water to the snow and ice-covered shores.

Stieler said they had several old suits, but to repair those cost about as much as buying new ones, plus the new suits reflect the strides in water-saving technology.

Eleven buoys, most of which will be installed at Albert Lea Lake with a few on Fountain Lake, will help keep boaters from hitting shallow spots.

“It’s more than just a depth finder, but it helps look for things underwater,” Harig said. “The toughest thing to do is to find something that’s been dropped in the lake.”

“With the sonar, it’s something we hopefully never have to use,” Harig added.

Freeborn County Emergency Management Director Mark Roche said the Albert Lea Fire Department assists 16 fire departments, two police departments and one sheriff’s office, plus emergency management services and first responders across the county. He said the first minute of an emergency call are the most important in a life and death situation.

“Across the county, we’re all working together for the common goal in the most efficient way,” he said.

Harig said this sort of equipment is important in a situation like the saving of the three duck hunters whose boat capsized at Pickerel Lake in November 2009.

The Fire Department will take the equipment out several times each year for practice sessions.