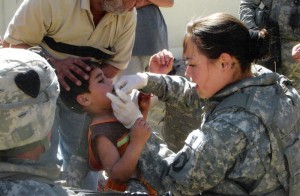 Sergeant Jenna Lee, a medic, treats a young boy in Iraq. Lee is the granddaughter of Roy and Barb Springborg of Albert Lea. -- Submitted photo

Going out on patrol was part of the daily life in Iraq. As the only female in the platoon, Lee was partnered with 32 infantry men. They would go out in their four-truck convoys made up of armored humvees. At times, they would be on a dismounted patrol outside of the truck. This would give Lee the chance to interact with the Iraqi people and provide basic medical care, such as treating and stitching open wounds.

While serving in Iraq, Lee became friends with Corporal Jessica Ann Ellis, who was also a medic, though not in the same platoon. They shared the same living quarters.

On Mother’s Day 2008, the vehicle that Corporal Ellis was in was hit with an explosively formed projectile. In the blink of an eye, Lee’s “battle buddy” was gone.

“Life goes on” is a saying you often hear when something bad happens. In the military, where there are assignments that must be carried out and duties that must be fulfilled, that saying rings very true.

“You don’t get a chance to mourn,” Lee said. “You have to carry on with your job.”

Now, two years after the loss of her friend and fellow soldier, Lee is learning that life truly does go on. Lee gave birth to a baby boy on Sept. 11 and is married to Sergeant Jeremiah Lee. The baby’s name is Jaxson Jeremiah Jae Lee. The name Jae is in honor of Lee’s fallen friend Ellis.

There is no doubt that the events that she has experienced have had profound effect on her life.

“I appreciate my family more and realize how lucky I am to live in this country. I learned to value life more, to turn to my faith,” Lee said.

Lee requests prayers for her husband, who was deployed to Afghanistan on May 18, 2010.

Lee is the granddaughter of Roy and Barb Springborg of Albert Lea.