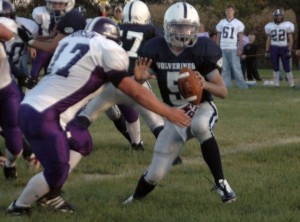 GLENVILLE— The Glenville-Emmons football team looked to start the season off on the right foot as they hosted Grand Meadow on Thursday in Glenville.

Grand Meadow quarterback Caleb Leichtnam made sure that didn’t happen.

Leichtnam put on a show as he scored five rushing touchdowns on the Wolverines defense to lead Grand Meadow past Glenville-Emmons 41-8.

“We came out and we didn’t execute,” Glenville-Emmons coach Ryan Kelly said. “They had their way with us. We came out tight in the first half and were worried about things we shouldn’t have been worried about. We weren’t playing our responsibilities.”

The Wolverines had five turnovers in the game that lead to four Grand Meadow touchdowns.

“We had some fumbles in the first half that I haven’t seen from the kids all preseason.” Kelly said. “We can’t win with that many turnovers, we have to clean that up.”

The Superlarks set the tempo right from the start with their opening drive.

They rushed six straight times and ended with a Leichtnam three yard touchdown that put the Superlarks ahead 6-0.

Leichtnam was far from done.

After a Glenville-Emmons fumble, Grand Meadow found itself at the 50 yard line when Caleb Leichtnam found a hole and sprinted 50 yards for another touchdown to put the Superlarks ahead 12-0 with 2:40 left in the first quarter.

With a 12-0 lead, Leichtnam scored two more touchdowns in the second quarter, while Perry Stejskal also punched in a touchdown to give Grand Meadow a 34-0 lead at halftime.

“We had guys who were doing too much,” Kelly said of the defense in the first half. “They weren’t doing their jobs and were trying to do other people’s jobs. We got ourselves out of position and the cutbacks happen and then their is nobody home.”

While the first half was not very kind for the Wolverines, Glenville-Emmons did manage to pick up their play in the second half.

The score would stay 34-8 until the fourth quarter, when Leichtnam scored the games final touchdown, his fifth rushing touchdown of the game with 6:22 left in the fourth to put Grand Meadow ahead 41-8.

After allowing 34 first half points, the Glenville-Emmons defense limited the Superlarks to only one touchdown in the second half.

“We had to get back to basics and to what we do,” Kelly said of the teams second half. “The kids came around. They made a couple of plays and gained some confidence.”