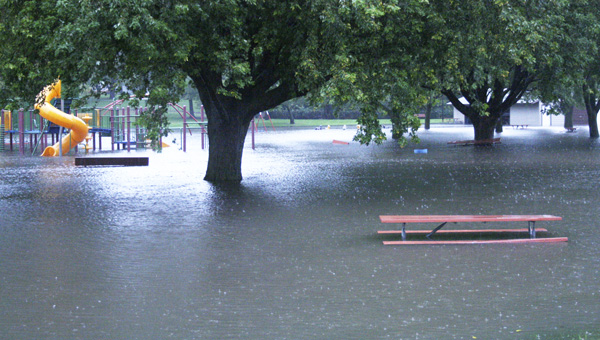 According to City Administrator Jeremy Germann, who estimated the town had received between 6 and 8 inches of rain, the rainfall was causing the storm water system to back up.

The backup was causing water overflow on the streets and flooding in basements.

Park benches and playground equipment at Half Moon Park, located at Seventh Avenue SW and Half Moon Road, were sitting in a couple of feet of water. The skate park and practice field across the street were also flooded. Water was gushing out the top of a manhole cover on the street cutting between the two. 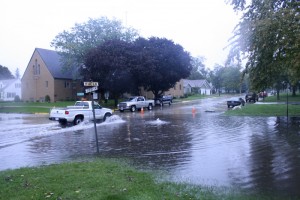 A pickup fords a large puddle at the corner of First Avenue Southwest and Seventh Street Southwest in Wells on Thursday morning. -- Michelle Haake/Albert Lea Tribune

Germann said city employees had been working all night to try and keep up with the problems and pinpoint problem areas.“The water is trying to get from one part of town to the other, and it’s pushing up through the manholes,” he said.

Germann said the less water that’s in the system, the faster they can get the water that’s backed up out of the system. “Once we get a break in the weather, we can clear that out,” he said.

To help alleviate water usage, USC Schools dismissed at 10 a.m. on Thursday. According to USC Superintendent Jerry Jensen they were notified by city officials at 8:30 a.m. of the situation. “We felt it was our obligation to help alleviate the problem,” he said.

“For a short period this morning, we had troubles finding substitute teachers,” Jensen said. He said that some faculty members had called in to take the day off, either due to personal situations with water at their homes or road situations.

According to Jensen, the buses got the children to school safely, radioing each other when they would come across a problem area in the road. In preparation of the early dismissal, his staff was contacting parents to make sure they were aware of the unusual dismissal and to have someone at home. He didn’t anticipate any problems getting the children home safely, and said they were not experiencing flooding at the school. 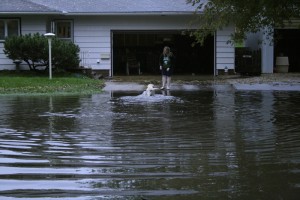 Germann said his office had received reports of sewer backups in basements. A handful of residents had contacted the city office to report storm water backup in their basements, as well.

“It’s deja vu all over again,” she said. VanGuilder experienced a sewage backup in her basement in 2004.

VanGuilder’s son-in-law had two small sump pumps and one large pump in place, trying to get the water out before it rose up to the electrical box. She was also concerned about her water heater and furnace, also in the basement, along with a pool table and handful of furniture.

She said the cleanup would take some time, as after the water was removed, she would have to dry and fumigate the basement and furniture. A furnace specialist, she said, would need to come in and dry out the furnace before winter.

Not in a flood zone, VanGuilder said she doesn’t carry flood insurance. “I already called the insurance company and they offer sewer back-up insurance, so who knows if that wouldv’e covered this anyway,” she said.

Jason Dobbe who lives next door at the corner of First Avenue and Seventh, was not getting any water as of Thursday morning, but he had in the past. He had three sump pumps and one sewage pump running. “Everything’s keeping up so far,” he said.

A stream, which Dobbe estimated was about 3 1/2 feet deep, separated him and VanGuilder from their neighbors across the street, and the corner of First Avenue and Seventh Avenue was barricaded off with orange cones.

“We’re trying to take care of issues as we become aware of them,” said Germann.

No crashes or full road closures had been reported as of noon, according to Germann.