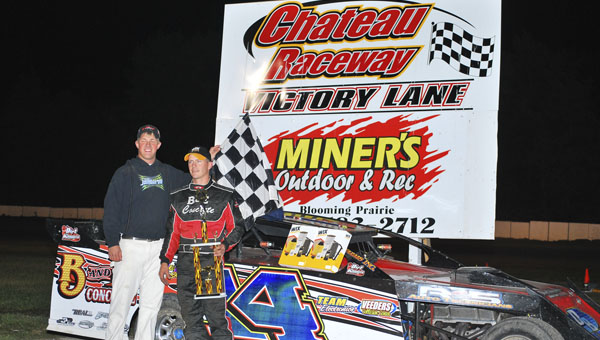 By Todd Narveson, For the Tribune

LANSING — The road warriors of the United States Modified Touring Series (USMTS) rolled into the Chateau Raceway last Friday. A field of 41 drivers filled the pits for stop No. 12 on the Casey’s General Store Hunt For The National Championship presented by Bad Boy Mowers.

It was a cool and crisp late summer evening, but that did not stop race fans from witnessing the red-hot action on the track. Miner’s Outdoor and Recreation of Blooming Prairie sponsored the event that also featured the final point night for the WISSOTA Street Stock and Pure Stock divisions.

The Misgen Auto Parts Pure Stocks were first up for their feature event. James Connors led from the pole position for most of the 15-lap feature. There were several cautions during the event that kept things tight up front.

Connors was looking good and primed to win his first feature at the speedway. But late in the race Adam Godeke made a serious bid for the lead. Godeke got close to Connors with two laps to go.

When the white flag flew, so did Godeke as he stole the lead from Connors. Godeke led the pack back to the checkered flag for his fourth win of the season. Brady Krohnberg also slipped past Connors for second while Connors was third. Jason Newkirk finished fifth and claimed the track championship.

Brent Holland and Kory Adams brought the field to the green at the start of the RS Auto Rebuilders WISSOTA Street Stock feature. Adams took the lead while Holland and Tony Shaner trailed. Tyler Peterson broke on the first lap and dropped to the infield.

A.J. Zvorak and national point leader Danny Hanson were on the fly and cracked the top five on their way to the front. Zvorak worked his way through traffic and was in the lead on lap eight. Hanson then got to second and from there it was a two-horse race.

Hanson challenged, but Zvorak held him at bay and won the race. It was Zvoraks’ sixth win of the year, and Zvorak also brought home his third straight track championship. Hanson was a close second with Dan Holland, Adams and Shaner in the top five.

Then it was time for the 26-car, 40-lap, $3,000 to win USMTS main event. After out of car introductions, redraw for the top eight drivers, the command to start engines and the four abreast salute to the fans, it was time to get down to business.

Local start Josh Angst drew the pole with Jon Tesch alongside as the field came to life under Ryne Staley’s green flag. Angst and Tesch circled the speedway side-by-side with Tommy Myer close behind the lead duo.

Myer took to the outside of Angst and stole the lead on lap two. The top three remained close in formation on laps three and four. Meanwhile, Jason Hughes was on the prowl and entered the top five on lap six.

Tesch made his move and zipped past Angst for second as Hughes dispatched Mike Steensma for the fourth spot. On lap 10, Tesch had reeled in Myer up front and the battle for the lead was on.

Myer wheeled his car around the top, while Tesch worked over the low groove. The pair was door-to-door on lap 12, and Tesch was scored the leader at the line. Hughes had closed in on Angst for third and was now trying to wrestle that spot away.

Tesch opened up a small lead on Myer as Hughes managed to get past Angst on lap 17. The leaders entered lapped traffic on lap 19, but Tesch and Myer sliced through it like a hot knife through butter.

Tesch and Myer continued to put traffic a lap down as Hughes closed in on Myer. Stormy Scott was now in the top five and making his presence felt chasing down Angst. Now Hughes had caught Myer in lapped traffic and the battle was now for second.

Hughes used the low groove to snag second away from Myer on lap 22. Scott passed Angst for fourth and then went after Myer in the late stages of the race for third. The leaders continued to work through traffic as Hughes tried to gain ground on Tesch.

Tesch worked the lapped cars to perfection and drove to the checkered flag first in the green to checkered feature. Tesch continues his hot streak after nabbing another $3,000 check and his first win of 2010 at Marshalltown earlier in the week. Hughes finished second and Scott passed Myer for third. Angst rounded out the top five.

There will be no racing this weekend as that show has been cancelled. The Chateau Raceway will roar back to life on Friday, Sept. 17, with Border Wars for the B-mods along with USRA Modifieds and Pure Stocks. For more information, go to www.chateauraceway.net.