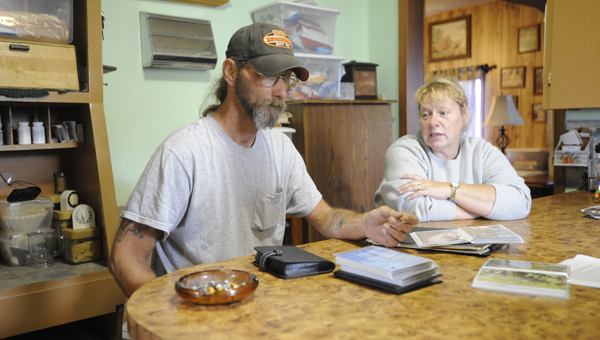 Mike and Deb Hayes explain their insurance claims in the home of their kitchen in Armstrong. Mike says they are sharing their story so others don’t find themselves in the same difficult situation. -- Tim Engstrom/Albert Lea Tribune

ARMSTRONG — Three months after numerous tornadoes struck down June 17 in Freeborn County leaving a trail of devastation, one local couple is in the middle of a battle they hope no one else will ever have to experience.

Mike and Deb Hayes of 21509 700th Ave. — the house just north of the tracks in Armstrong — are in the middle of a dispute with their insurance company, Cottonwood-based North Star Mutual Insurance Co.

Because of the frustrations they said they have experienced, they are willing to walk away from the company and their claim, even in this time of need.

Mike said on June 17 — a Thursday — he was in Illinois on his way home from one of his two weekly routes as a truck driver. He typically has one run from Saturday to Wednesday and another from Wednesday to Friday. 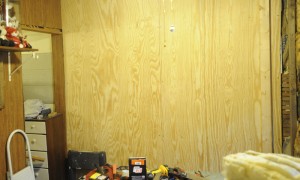 The west wall of the bedroom in the Hayeses’ home remains unfinished. Despite lack of insurance funds, the family is working to finish it little by little before winter arrives. -- Tim Engstrom/Albert Lea Tribune

Deb had just gotten home from work at the Good Samaritan Society of Albert Lea and was with her stepson when the weather started “churning.”

After receiving multiple phone calls from loved ones to seek safety, they came into Albert Lea.

After the storm hit the area, Deb’s son first went to survey the damage. Deb followed shortly after.

Though their house was not a complete loss like some of their neighbors in the area, their property received many damages, including downed trees, and damages to the garage, house and other structures on the property.

The framing and glass in the Hayes’ bedroom window was blown out, embedding glass into the recliner in the next room.

Their property has 9.9 acres, and on it sat a 1977 Freightliner Cabover, which Mike was restoring. It had an old trailer, too, and in it he was storing boxes of personal belongings. The truck and its trailer were picked up June 17 and sat back down again on its side. The property inside the trailer was badly damaged.

“It looked like someone took a giant spoon in there and stirred it all up,” Deb said. “We were just like, ‘How can this wind do this?’”

Mike didn’t see the damage until he returned home Friday.

By 9 a.m. Friday, their insurance agent from Wells Insurance Co. had already arrived at the house, and the couple said they were pleased with how quickly the agent responded.

But then things began to go downhill, they said. 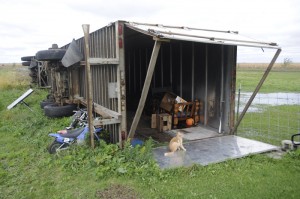 Much of the dispute between Mike and Deb Hayes and North Star Mutual Insurance stems from the possessions Mike had stored in this semitrailer, which toppled in the June 17 storm. -- Tim Engstrom/Albert Lea Tribune

Mike said the agent told them their insurance company, North Star Mutual Insurance Co., would only be able to pay to take the downed trees off of the buildings, not those that had fallen in the yard or the drive.

The Hayeses had been a customer of the company for 18 years, paying $1,200 a year on insurance, and only making two minor claims in those years.

Mike had to leave to go back on the road on Saturday — not coming back until Wednesday — and the adjuster wanted to come on Monday.

Deb said with the shock she was experiencing following the tornadoes, she wanted her husband to be there when the adjuster came to the house. The adjuster wanted to come to the house when the couple wasn’t home, which frustrated the Hayeses because there were internal damages, too.

“I’m the paying customer. Aren’t they supposed to bend to my schedule?” Mike asked.

The adjuster ended up coming that Thursday — a week after the storm — and took photos of the damages, including the trailer.

Mike said he and his wife were issued a check for about $15,100 for repairs after their $1,000 deductible was taken out.

They were also issued a $6,300 check two months later, which the Mike said was deposited and sent over to Albert Lea Tree Service for their work removing downed trees. The couple spoke highly of the tree company’s work and professionalism.

Mike said the $15,100 check allowed he and his wife to fix most of the roof of the house, fix the west door and ridge cap of the barn and the well house.

That left straightening or repairing the garage, fixing the west wall in the shop and the repairs to their bedroom wall and window, along with the personal property damages, mostly what was in the semitrailer.

A contractor estimated there was still about $10,000 in building damages remaining, not including the garage.

After dealing with frustrations about some items being covered and some not, the couple then began to tackle their loss in personal property. They said the insurance company advised them to make a list, and they came up with a three-page list of damaged personal property. 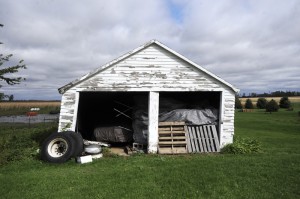 The garage at Mike Hayes' home tilts to the east, away from the direction of winds on the day of the tornado outbreak, June 17. Mike says the insurance company's estimated price to straighten it is much lower than any contractor quoted him. -- Tim Engstrom/Albert Lea Tribune

Two weeks after they submitted this list and a letter to the insurance company, they hadn’t heard a response.

Shortly after, they received a call from Scott Gleitz, North Star Mutual Insurance Co. special investigator, who was the adjuster’s supervisor.

Gleitz told them the adjuster had been having some personal problems and that the company was going to issue another check for about $8,800 for building repairs. He said he wanted to come out and view the damaged property again.

Mike said because the adjuster had already seen the property, he said he and Deb had already disposed of many of their destroyed or damage items.

They burned the items that could be burned and trashed the other items.

He said he told Gleitz that he and Deb had already disposed of much of the damaged property but that the adjuster had taken pictures.

Gleitz reportedly still wanted to come out and talk about the personal property list and told the couple he wanted them to go to the law enforcement center to complete an examination under oath about their damaged property. It would take about four hours, Hayes estimated.

Mike said he felt the insurance company was looking for excuses about why they could not pay on the claim as it should. After all, the company had photos of the damaged property.

Plus, having to go into the law enforcement center would cause Mike to have to give up one truck haul, which brings in revenue of about $3,000, and for Deb to leave work, which would cause them to lose income as well, he said.

He said he threw his hands up in the air out of frustration.

Gleitz also said in a letter to the Hayeses that because of the ongoing dispute in the matter the company has issued a stop payment on the $8,800 check.

“Amounts determined to be owed to you under the terms of the policy will be paid in future checks, but only after you have fulfilled the duties outlined in the policy, and an agreement on the amount of damages is reached,” the letter states.

It noted that the examination under oath is one of the couple’s duties under their policy.

“They have no problem accepting the check for the premium, but when they need to pay us for damages,” Mike said. “I’m at the point where I’m willing to take the loss.”

He said he sent the company a letter Sept. 13 voicing his frustrations and ultimately firing the company.

In a letter dated Sept. 20 from North Star, Gleitz responded that he took Mike’s letter to mean that the couple was unwilling to submit to an examination under oath and that refusing to appear constitutes a breach of the contractual duties.

“Unless we receive confirmation in the next 10 days that you are willing to appear for questioning, no further payment will be made, or considered, with respect to this claim,” the letter states.

The Hayeses said they question why a dispute over personal property would affect a check for building repairs.

Gleitz said the investigation into the Hayeses’ case is ongoing.

“Our file is open,” Gleitz said. “We have been waiting for them to comply with our investigation.”

He said the examination under oath is an investigative tool that is used quite often.

He also noted that there are investigations open with other agencies as well on the matter.

“This story is long from over,” he said. 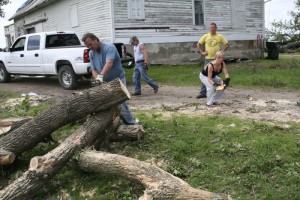 The Tribune happened to snap photos at the home of Mike and Deb Hayes three days after the tornado. People showed up to help remove fallen trees. -- Tim Engstrom/Albert Lea Tribune

He said North Star has dealt with thousands of claims related to weather damages in southern Minnesota this summer, noting that he was limited on what he could say about the Hayeses’ specific case because of data privacy regulations.

He added he presumes the company still possesses all the photos taken by the adjuster but doubts if it has any taken by the agent. He said the agent has no obligation to forward his or her photos on, but if they do take photos, they usually send them with the original notice of the loss.

“If the agent took photos, I certainly never received them,” Gleitz said.

In the meantime, Mike said he and his wife just want to get their lives back in order.

“I want to be able to move on and have the tornado be a part of the past,” he said.

They plan to find a new insurance company and a new agent.

“We know so many people who have fought and fought with insurance companies,” Deb said. “We’re going to get through this fine, but why should you have to struggle with the insurance like this?”

Other than this conflict, the Hayeses said they have received “overwhelming” support from the community and wanted to thank the Salvation Army, the American Red Cross, friends, family and even strangers for their assistance.