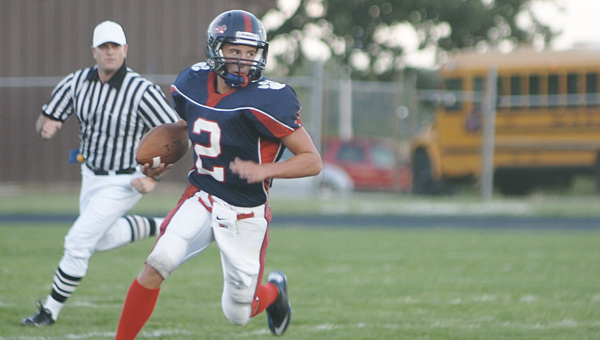 Quaterback Kyle Kriewall runs with the ball against Waseca at Hammer Field earlier this season. Kriewall and the rest of the Tigers’ rushing attack will need to perform well Friday in order to pull off an upset. -- Andrew Dyrdal/Albert Lea Tribune

Albert Lea’s opponent Friday night may be 0-2, but their record doesn’t reflect the team’s abilities.

The Huskies lost 42-14 to Wayzata in the opening week of the prep football season and fell 21-8 at home to Mankato West last week.

Wayzata is one of the largest high schools in Minnesota, and is known as a good football school, according to Anderson; West is one of the top teams in the conference.

The Huskies will present problems for the Tiger’s defense will their rushing attack led by senior Jesse Ebeling. Ebeling rushed 30 times last week, compiling 156 yards on the ground. Owatonna had another 100-yard rusher that game, with senior Collin Wencl earning 104 yards on 18 carries.

“Owatonna is best when they run the ball down the field,” Anderson said. “They will try and do this against us. We need to try and prevent big plays, which means the defense needs to be physical and tackle well.

Last week, Anderson said the Tigers need to be more focused, coming off of their loss to Winona, and not be satisfied with just one win.

If Albert Lea wants to take down a 5A school for the second consecutive season, they’ll need to do just that, while scoring some touchdowns as well.

Anderson said the offensive line will play a big role in making that happen.

“We must be able to move the ball on the ground against them,” he said. “We are preparing for them like we prepare for everyone else.”

The Huskies and Tigers kick off at 7 p.m. tomorrow at Hammer Field.