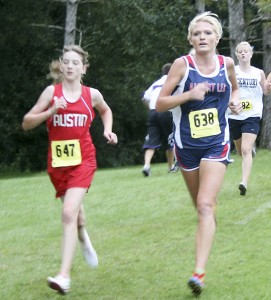 Bailey Thompson runs next to an Austin runner. -- Andrew Dyrdal

“The time and effort the runners put in over the summer is paying off,” Albert Lea head coach Jim Haney said. “Both teams had their best race of the season. The course was tough with many hills and tough terrain but the kids handled the course well.”

Steve Kruen finished first for the Tiger boys, and 42nd in the field, completing the 5k race in 17 minutes and 54.68 seconds.

“Kreun led the way,” Haney said. “The boys packed up and were able to stay together during the race.”

“Bonnerup, Christian, Luc and Eli all had their best races of the season,” Haney said. “I am impressed with the boys as they attacked the hills and challenged during every part of the race.”

“Bailey is putting together a nice season and has provided great leadership with her consistent performance,” Haney said. “She has goals that she wants to reach and she will continue to push herself to reach those goals.”

“The rest of the girls all did very well,” Haney said. “Tewes dropped one minute from her time last year, Kenis, Behling and Sager all scored for the Tigers.

“We are getting better and the girls and guys are gaining in confidence,” Haney said. “It is exciting to see the team to continue to grow.”

The Tigers race again at 4:30 p.m. Monday in Fairmont.