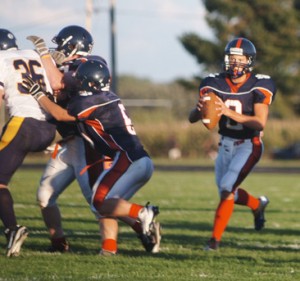 After a thrilling second half surge, the Albert Lea Tigers football team fell 17-14 last Friday against Owatonna at Hammer Stadium. This week, they will look to get off to a faster start against a speedy Faribault Falcons team on the road Friday night.

“We’re playing the fastest player in the conference,” Albert Lea head coach Clay Anderson said of the Falcons’ Anthony Gustafson. “He’ll be all over the place. We’ll have to do some things to account for that.”

Gustafson is a senior who can line up at quarterback, halfback and wide receiver, and usually leads the Falcons in offensive production.

The Falcons opened the season 2-0, with wins over New Prague and Mankato East, but were pounded last week 48-6 by Mankato West, the No. 3 ranked team in class AAAA.

To beat Fairbault, the Tigers will need a more successful rushing game than they had against Owatonna (109 yards) to counter the Falcons’ attacking defense.

“Faribault is another tough-nosed school where they’ll bring the heat to you,” Anderson said. “Hopefully we’ll take some confidence out of the (Owatonna game) and go up there and play a good game.”