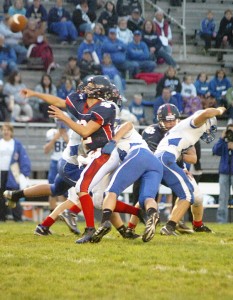 Albert Lea quarterback Kyle Kriewall releases the ball as he is hit by an Owatonna defender during the second quarter Friday. -- Andrew Dyrdal

Down three points late in the fourth quarter, the Albert Lea football team had two chances to tie or beat the Owatonna Huskies at Hammer Field Friday, but both drives ended in turnovers en route to a 17-14 loss.

“We battled,” Albert Lea head coach Clay Anderson said. “I think we proved to ourselves that we can play with the best teams in the (Big Nine).”

With just over six minutes left in the game, the Huskies were in control, driving towards Tigers’ territory ahead 17-7. 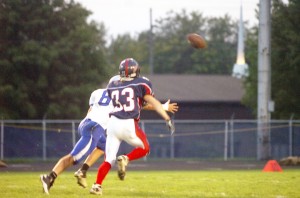 On third-and-eight on his own 44-yard line, Huskies’ quarterback Mitch Hawkins threw an errant pass that was intercepted by Albert Lea’s Aaron Klatt.

On the second play of the following drive, Tigers’ quarterback Kyle Kriewall threw a pass from midfield towards Albert Lea’s sideline intended for Corey Hansen. An Owatonna cornerback tackled Hansen before he could make a play on the ball and the Huskies were charged with a 15-yard pass interference penalty, setting up a Tigers’ first-and-10 from the Huskies’ 35.

After Dillon Stolt brought the Tiger offense to the 30 on a five-yard run, Kriewall found Dalton Westerlund on the side of the end zone for a 30-yard touchdown pass, bringing the Tigers within three points with three and a half minutes to play.

“Our kids believed in themselves by the end of the game,” Anderson said. “I’m really proud of how they responded.”

Owatonna started their next drive on the Tigers’ 48-yard line, but lost two yards on four plays and were forced to punt.

Albert Lea got what looked to be its last chance when they set up at the opposing 33-yard line with 3:16 left.

On the drive’s first play, Kriewall and the tailback had a botched handoff and the Huskies recovered the fumble, the Tigers’ third of the game.

But the stingy Albert Lea defense again held Owatonna to only four plays, and forced a turnover on downs, giving Kriewall once last shot at an upset.

The Tigers took over at Owatonna’s 24-yard line with just 34 seconds left.

Kriwall opened the drive with a quick 10-yard pass to Klatt, who got out of bounds to stop the clock.

His next two passes fell incomplete and on third-and-10, Kriewall snapped the ball with just three seconds on the clock and threw and interception downfield to end the game.

“It stinks when you lose by three,” Anderson said. “When you’re close and you lose it’s hard — and it should be hard — because you battled all week (in practice) and put everything out there.”

The Tigers outscored Owatonna 14-7 in the second half and had plenty of opportunities to upset the Huskies, who earned their first victory of the season.

After giving up 41 points to Winona last week, the Tigers defense responded by holding Owatonna to just 248 yards of total offense.

“Defensively we were great all night,” Anderson said. “I’m proud of the physical nature we brought to the game. We had a good week of practice and we played well.”

With first-and-goal on the five-yard line, Albert Lea couldn’t find the end zone, getting sacked on fourth-and-goal from the two.

“Unfortunately it came back to some turnovers again,” Anderson said. “That probably cost us in the end. You’ve got to give Owatonna credit, they were very strong defensively and by the best run defense we’ve face (this season).”

The Tigers averaged over 300 yards rushing during the first two weeks of the season, but were held to just 109 against the Huskies.

Ethan Abben, who entered the game as the team’s leading rusher — 209 yards on 46 carries — was limited to 33 yards on 12 carries Friday.

Hansen ran for 48 yards on 10 carries and Dillon Stolt had 25 yards on eight attempts.

Trailing the entire game forced the Tigers to throw more than usual.

Kriewall completed 6-of-17 passes for 98 yards with two touchdowns and two interceptions. Klatt was 1-of-1 passing for 18 yards.

Klatt also caught two passes for 38 yards. Westerlund had two receptions for a touchdown and Solie had one catch for 19 yards and a touchdown.

The Tigers play again at 7 p.m. Friday at Faribault.