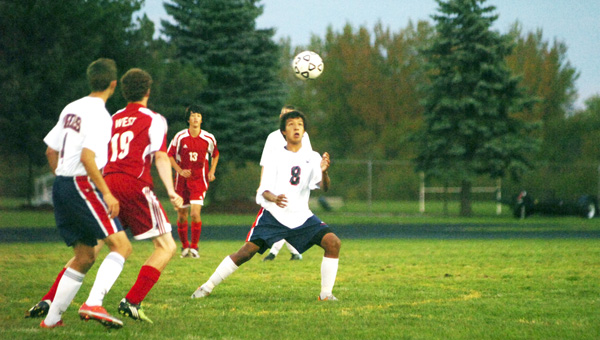 Darik Weigel heads the ball during the first half against Mankato West Tuesday. -- Jon Theuer

Albert Lea and Mankato West both unable to score

The Albert Lea boys’ soccer team looked to get its second win in a row on Tuesday night as they hosted Mankato West in Big Nine action.

Both teams had opportunities to score but were unable to come through as the teams went full 90 minutes without scoring to end in a 0-0 draw. 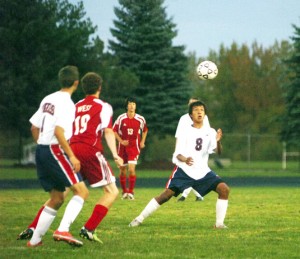 Darik Weigel heads the ball during the first half against Mankato West Tuesday. -- Jon Theuer

“These are fairly evened matched sides,” Albert Lea head coach Elia Romano said. “We exchanged punches fairly well. They had their chances and we had ours, and neither of us took them.”

In the first half, the Scarlets brought the pressure early.

Mankato West controlled the ball in Albert Lea’s half for a majority of the first 20 minutes before Albert Lea started to play aggressive.

“It’s not they weren’t trying hard, it was reaction speed,” Romano said. “It takes a little while to work yourself up to game speed. To be quite frank, they were a little sluggish in practice yesterday, so I think they were dusting off a little of the rust from yesterday.”

After that first 20 minutes though, Albert Lea’s play picked up as they had scoring opportunities but came up short as they went in to halftime tied at zero.

In the second half, the Tigers and Scarlets both had their chances to put themselves on the scoreboard.

With 14 minutes and one second on the board, Mankato West fired a shot that bounced off the post and sailed out of play.

Less than a minute later, Albert Lea’s Timothy Furland unleashed a shot from just outside the box that grazed the post and just missed being a goal as the Scarlets goalkeeper made the save.

Cameron Hove came up big in net for the Tigers as he recorded 13 saves on the night and earned his second straight shutout.

“This is Cams’ second clean sheet in a row,” Romano said. “Cam has done a great job for us these last couple of games. Coming out, keeping us alive and keeping us in the game.”

“We take a lot of pride in our defense,” Romano said. “We started better defensively at the start of the season and we have grown in both regards. And we continue to get tighter defensively.”

Romano points out that he is happy with the direction his team is headed.

“I’m really happy because the team continues to make strides forward,” Romano said. “We continue to progress from game to game. We show a lot of intensity and were winning a lot of the 50-50 balls a majority of the evening and that puts us in a place to compete.”

With Mankato West in the rear view mirror, the Tigers now look to Thursday when they make the trip north on Interstate 35 to face the Owatonna Huskies.

“Being disciplined defensively, keeping our shape and getting behind the ball quickly are going to be keys for us,” Romano said. “Hopefully we can bring some of effort and energy we have had in the last couples of games and combine it with a slightly more purposeful approach to attacking the final third and get some goals.”