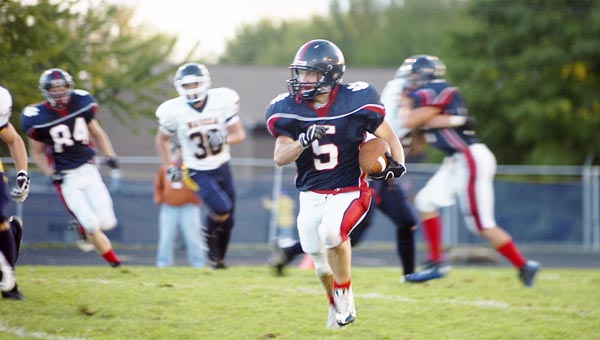 Albert Lea dominated Waseca for 42 minutes Thursday, holding the Bluejays scoreless until the six-minute mark of the fourth quarter while racking up 29 points through a surging rushing attack, winning easily 29-7.

While the Tigers’ (1-0) defense shut down Waseca (0-1) all night, sophomore Ethan Abben stole the show during first career varsity start.

Abben rushed for 120 yards and three touchdowns on 26 carries, peeling off runs of 13, 15 and eventually 23 yards, which came on a touchdown run in the fourth quarter. 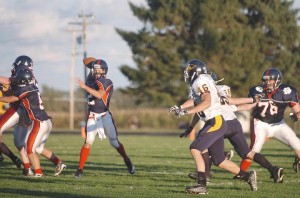 Abben and the rest of the Tigers’ running backs benefited from a tremendous performance by the offensive line, who allowed Albert Lea to gain over 300 yards on the ground.

“All five (offensive lineman) had great two-a-days and a great camp,” Anderson said. “We knew we were strong on the offensive line and I think we showed it tonight.”

The Tigers opened the game with a solid offensive drive. Abben, Cory Hansen and Dillon Stolt combined for nine runs and moved the ball 39 yards to Waseca’s 35-yard line. Three incomplete passes from Kyle Kriewall, intended for Aaron Klatt and Clayton Bratten, turned the Tigers over on downs and gave the Bluejays their first shot on offense.

The Tigers’ defense sent a message early, though, as Waseca went three-and-out and punted the ball back to Albert Lea.

With the Tigers threatening on Waseca’s 10-yard line, the Bluejays forced and recovered a fumble, but a facemask penalty on the same play gave the football back to Albert Lea. The Tigers failed to convert on fourth-and-11 and Alik Smed connected on a 33-yard field goal to put the Tigers ahead 3-0.

On third-and-11 midway through the second quarter, the Tigers had another chance at scoring when Abben was tackled into the end zone on a 17-yard rush. The touchdown was called back on a holding penalty, sobering the crowd after an electrifying run.

But Klatt and Dalton Westerlund did one better.

After receiving a screen pass from Kriewall near the Tigers’ sideline, Klatt threw a pass across the field and into the end zone towards a diving Westerlund. Completely airborne, Westerlund caught the pass and completed the 26-yard scoring play.

The extra point put the Tigers up 10-0, the score they took to halftime.

“That’s Klatt’s favorite play,” Anderson said, laughing. “We ran it last year quite successfully at times and we just decided to call it — that got us going.”

The Tigers lost the shutout with six minutes left in the fourth quarter on a three-yard rush by Waseca’s Brock Kolander.

“We had a lot of great performances,” Anderson said. “I really thought we performed better than we saw in the scrimmage. Tribute to my kids for putting in a good two weeks of practice.”

Kriewall finished 2-for-6 for 18 yards passing with 45 yards rushing on six carries.

Hansen and Stolt ran for Stolt rushed for 70 and 50 yards, respectively.

The Tigers go for win number two Friday at Winona.