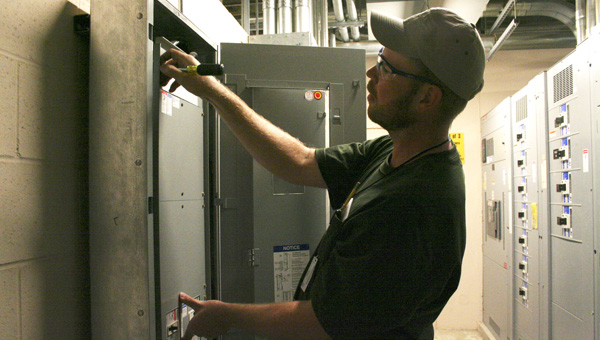 Kevin Nelson, journeyman electrician at Albert Lea Electric Company, opens a panel near the ambulance bay at Albert Lea Medical Center Friday afternoon. Nelson said he likes being in a union because he can get better wages and benefits. -- Kelli Lageson/Albert Lea Tribune

The local union chapters in the area have been working to increase membership and make better working conditions for members.

Patrick Neilon, president of the local chapter of the United Food and Commercial Workers Union, said the union has been relatively unaffected by economic recession because of the products that are made in the various manufacturers that employ union members.

The local UFCW main office is in Albert Lea, with another office in Fort Dodge, Iowa. Ventura Foods, Cargill Foods and Fountain Industries in Albert Lea, Birds Eye Foods in Waseca, Armor Eckridge in Mason City, Iowa, and various other food and pet food manufacturers in Iowa are a part of the Local No. 6 chapter of UFCW.

Neilon said each manufacturer has its own union that holds monthly meetings. He said his office is always available to help union members, and there are also union stewards at each workplace to help with contract, seniority or pay issues.

“There’s no real job protection without a union,” Neilon said.

He said Minnesota is closed shop, which means workers have to be part of the union, while Iowa is open shop, which means workers can choose whether they’d like to join the union. Though Iowa is open shop, the Nestle Purina plant in Davenport, Iowa, has 100 percent of the workers in the UFCW union. Neilon said being part of a union has many benefits.

Benefits he listed include insurance, pension and job security. He also said the union can help when issues arise about seniority in the workplace.

“At the meetings we go through issues they have,” Neilon said.

He said politics is often a topic at the meetings as well because laws change. Neilon also said the union supports political candidates who support labor.

Neilon also said there is a lot of history with the union, and the times are changing.

“We’ve had to adapt and change to meet the times,” Neilon said.

Neilon said there are more women and minorities in the plants who all need to be represented and helped as well. Political refugees are also a growing minority in area manufacturers.

“Their culture is so much different, and it’s hard to adjust to the culture and freedoms,” Neilon said.

He said minorities want to work, do a good job and be respected like everyone else, and it’s the union’s job to make sure that’s possible.

“In this country it doesn’t matter what color or race you are — we all have the same opportunities,” Neilon said.

Neilon said he’s willing to help anyone who’d like to organize a union. He also said the union has a good working relationship with the companies their members work for.

“We don’t agree all the time, but we work together to get things done,” Neilon said.

Another union in the area is the International Brotherhood of Electrical Workers. Electricians in Albert Lea will join the Local 343 chapter if hired at a union shop. There are shops in Albert Lea that aren’t in a union as well. Tracey Murphy, foreman at Albert Lea Electric Company, said there’s a lot of things he likes best about being in a union like the benefits and job security.

“Most journeymen go through an apprenticeship, which is funded through union dues,” Murphy said.

He also said union shops can call the union to hire qualified workers when extra help is needed. Murphy said this is a benefit to contractors as well because they can plan how much they’ll have to pay for the job.

The Local 343 chapter has monthly meetings in Owatonna, where union members can talk about health insurance, contracts or negotiations.