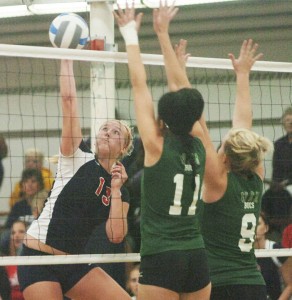 WELLS — The United South Central girls’ volleyball team looked to stay undefeated on Thursday as they opened their conference schedule against Waterville-Elysian-Morristown in Wells.

“It’s a huge morale booster for our team,” USC head coach Jolene Bute said. “They really work well together. We work as a team really well and I think that’s what won the game for us tonight.”

“We came out on fire in practice yesterday,” Bute said. “With the intention of that’s the way we need to start in a game. The girls all knew they could do this and work together as a team and get the job done.”

While the Rebels jumped out to an early lead in the first game, W-E-M turned the tables on USC in the second.

The Bucs jumped to an early 9-3 lead, taking advantage of several USC mistakes.

The Rebels fought back when Marielle Schultz served four straight points to pull the Rebels within two at 12-10. The game remained close with W-E-M in the lead 24-22 and one point away from winning the game.

With the Rebels down one at 24-23, Sahr earned an ace block and recorded two kills as USC fought back to earn a 26-24 win in game two.

“Thats all in the confidence of the players,” Bute said. “We just worked together and we knew we weren’t down by a lot.”

In the third game, it was Kayla Stenzel that led the Rebels to a quick start.

Stenzel served eight straight points that led USC to a 13-5 lead. From their it was all Rebels as Koestler founds Schultz and she set for Stenzel who got the kill that won the third game 25-14 for USC and earn the sweep.

The Rebels used a strong game from their front line, especially from Sahr and Stenzel.

Combined Stenzel and Sahr went 28-for-30 hitting, had 12 kills and four solo blocks.

“They are a wall,” Bute said. “They love to get up there and block the ball.”

Tayla Sunde and Schultz both went 17-for-17 in serving, while Schultz added 29 set assists.

Stenzel went 20-for-21 hitting with seven kills, while Sahr went 8-for-9 hitting, had five kills and four solo blocks.

The Rebels play again Saturday as they travel to the Mankato West tournament at Minnesota State University.