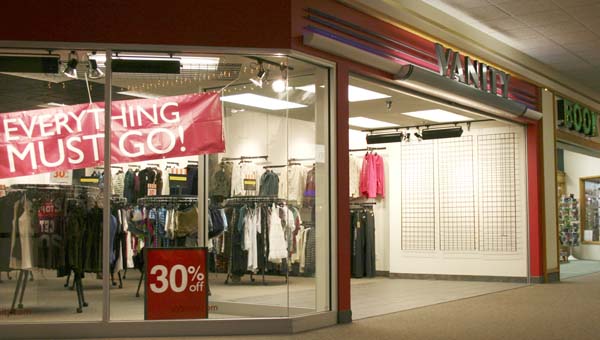 A sign hangs in the window of the Vanity store at Northbridge Mall signaling customers that the store is closing. Its last day will be Sept. 29. -- Sarah Stultz/Albert Lea Tribune

Juniors specialty retailer Vanity announced last week it will close its doors in the Northbridge Mall Sept. 29 after about 25 years in operation in Albert Lea.

The Albert Lea store is one of several closing around the country.

“It’s very unfortunate,” said Northbridge Mall Manager Barb Fate. “I can’t say it enough that we need to shop locally. We may not have the selections that the Cities have, but if we don’t shop locally, this is what’s going to happen to what we do have in town.”

Fate said the local mall staff tried their best to keep the store in Albert Lea but to no avail.

The Albert Lea location had 13 full- and part-time employees, according to local store manager Teresa Adams.

“It was a corporate decision to cut all the small stores,” Adams said. “Any stores that didn’t make a certain amount every year, more or less got cut.”

A call to the corporate Vanity office went unreturned.

Many items in the store are already marked down, and sales will continue through to the time of closing.

Adams, too, questioned whether more local shopping could have saved the store.

According to the Vanity website, the company has 200 store locations within 26 states. The corporation, officially known as Vanity Shops of Grand Forks Inc., is a mall-based chain that sells junior and teen women’s apparel and accessories.

It is a privately-owned corporation based out of Fargo, N.D.

Fate said she is making many efforts to fill the void once the company leaves.