Vernon Louis John Jahnke, 96, of Albert Lea, formerly of Bricelyn, died peacefully with his family at his side on Tuesday, Sept. 14, 2010, at St. John’s Lutheran Home in Albert Lea. Funeral Services will be held at 10:30 a.m. Saturday at the Bricelyn Lutheran Church in Bricelyn. Visitation will be Friday from 5 to 7 p.m. at Bruss-Heitner Funeral Home in Bricelyn, and will continue one hour prior to the service at the Church. The Rev. Patricia Hinkie will officiate and burial will be in the Bricelyn Lutheran Cemetery, Seely Township, Faribault County. Bruss-Heitner Funeral Home in Bricelyn is assisting the family with arrangements. 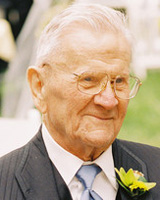 Vernon Jahnke was born July 1, 1914, in rural Mansfield, the son of Ervin and Mary (Meissner) Jahnke. On April 28, 1938, he married Marion Leland in Bricelyn.

Vernon was proud of his German heritage and often regaled the staff at St. John’s with his rendition of “O Tannenbaum” in German. He served as mayor of Bricelyn for a total of 10 years; from 1973 to 1975, 1979 to 1980, and 1983 to 1986, and was also active on the City Council. He was proud to be a life long member of the DFL. Vernon was an avid fisherman and loved to travel. A highlight of his life was a trip to the Holy Land. He enjoyed sharing his many photos and slides with family and friends. He was an active member of Bricelyn Lutheran Church and serving on the church council, and as president of the congregation.

Throughout his life he was engaged in farming, working for the Bricelyn Farmer’s Grain Elevator and for Monsanto Fertilizer Company. He also worked for Winnebago Industries in Forest City, Iowa. Prior to his retirement he worked at the Bricelyn School as a janitor and he drove school bus.

Vernon was preceded in death by his parents; wife, Marion, in 2005; his 17 year old daughter, Sharon, in 1956; his brother, Wilbert, and wife Lucille; his sister, Ardine Solum; and brother-in-law, Chester.