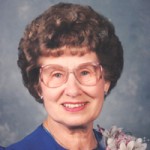 A celebration of Virgie’s life will be held Saturday at 1:30 p.m. at Bayview/Freeborn Funeral Chapel. Visitation will be one hour prior to the service. Virgie was a member of Grace Lutheran Church, Albert Lea.

Virgie was born April 12, 1918, in Hankinson, N.D., to Ashley and Isabel (Johnson) Ingerson. Virgie was one of five children. Living is Marilyn (Gordon) Allen of Morris. Deceased are twin brother, Vincent; Ione and Mildred.

She graduated from Hankinson High School in 1936 and thereafter she attended cosmetology school in Fargo, N.D.

After working a few years as a beautician, she married Elmer Holst. They were united on a Sunday afternoon on June 21, 1942, in the home of Virgie’s parents at Browns Valley. They became parents to Chuck (Linda Campbell), of St. Paul; Dave, of Lakeville; Don (Linda), of Albert Lea and Lee (Terri), of Albert Lea.

Elmer worked for Land ‘O Lakes, which brought the family to Albert Lea in 1955. During Virgie’s 24 married years, she raised her sons and provided a home filled with love.

Virgie was given the extraordinary task of being a single parent when Elmer died suddenly on Jan.31, 1966. She remained a homemaker, but later found work at Northside School and Cornick’s Nursing Home. Virgie was a perfectionist in sewing, handiwork, flower gardening, crossword puzzles and baking apple pies. She started a family tradition of “mom’s turkey” at holidays. She could fix anything with little of nothing. Virgie enjoyed the outdoors; camping with her family, the birds in her backyard, working the earth with her hands and walking.

Virgie will forever be in our hearts. Her smile and wit will stay with us forever.