The bride is the daughter of Alan and Kim Lebeck of rural Albert Lea. 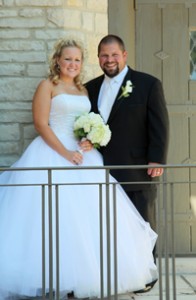 The groom is the son of Ron and Evelyn Neubauer of rural Freeborn.

Flower girls were Makenzie Herr and Addison Herr, daughters of Doug and Brenda Herr of Albert Lea, and Madison Christenson, daughter of Rachel Dickman of Austin.

Best man was Jesse Jensen, friend of the groom, of Buffalo Center, Iowa. Groomsmen were Mike Neubauer, brother of the groom, of Freeborn, Ryan Moore, brother-in-law of the groom,of Owatonna, John Bathke, of Wells, and Josh Cords, of Alden, both friends of the couple.

Ring bearers were Evan Moore and Owen Moore, sons of Dawn and Ryan Moore, of Owatonna.

Personal attendants were Paige Seadlund, of Albert Lea and Serena Sorensen, of Freeborn, both friends of the bride.

Program attendants were Josh Randall and Alli Randall, both cousins of the bride, of Oviedo, Fla.

The host and hostesses were Jim and Brenda Cords, friends of the couple, of Alden, and Doug and Brenda Herr, cousins of the bride, of Albert Lea.

A reception was held after the ceremony at Wedgewood Cove Golf Club in Albert Lea.

Joe is a graduate of United South Central High School and is a self-employed farmer.

After a honeymoon in Maui, Hawaii, the couple will reside in rural Freeborn.