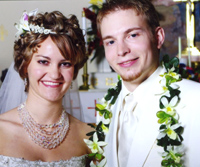 The bride’s parents are the Rev. James and Marilyn Norton of Nokamis, Ill. The groom’s parents are Dale and Nancy Kelly of Clarks Grove.

Flower girl was Lydia Norton, niece of the bride, daughter of Joshua and Candace Norton of St. James. She was assisted by her mother.

Best man was Vince Warner of Clarks Grove. Groomsmen were Michael Kelly, brother of the groom, of Sioux Falls, S.D., and Joshua Norton, brother of the bride, of St. James.

A reception followed the ceremony at Best Western, Carlinville.

Malayna is a 2006 graduate of Nokomis High School and a 2010 graduate of Bethany Lutheran College with degrees in music and business.

David is a 2006 graduate of Albert Lea High School and a 2009 graduate of Bethany Lutheran College with a degree in communications. He is employed with KAAL-TV in Austin.

A wedding trip will be taken to Jamaica in December. The couple resides in Clarks Grove.