Carolyn Nadine Privet and Timothy Sanford Chesterman were married on May 29, 2010, at St. Paul’s Episcopal Church in Winona. The Rev. Benjamin Scott performed the double-ring ceremony. 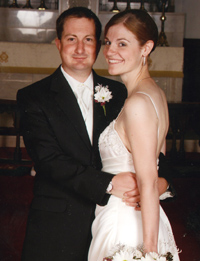 The bride is the daughter of Dwight and Sandra Privet of Caledonia. The groom is the son of John and Sally Chesterman of Albert Lea.

Music was provided by harpist Chris Ward of St. Paul.

The bride is a graduate of St. Mary’s University, Winona, where she received a Bachelor of Arts degree in English. Carolyn is currently attending graduate school at the University of Wisconsin-Eau Claire. She is employed at Target.

The groom attended Ballymaloe Cookery School in Shanagarry, County Cork, Ireland, and received certificates in cuisine and in wine. He is a graduate of St. Mary’s University, Winona, where he received a Bachelor of Arts degree in history. Tim is employed by the state of Minnesota at the Minnesota History Center in St. Paul.

The couple resides in Stillwater.