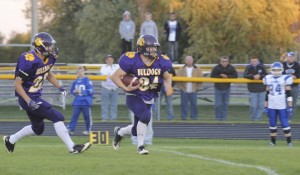 LAKE MILLS, Iowa — It was slow and methodical, but the Dike-New Hartford Wolverines football team racked up 322 rushing yards against Lake Mills Friday, en route to a 41-18 win over the Bulldogs.

“It was pretty simple football,” Lake Mills head coach Bill Byrnes said of the Wolverines’ offense. “But when you can execute it like they did it opens up other things.”

Those other things included a 71-yard run by the Wolverines’ Eric Joblinske late in the second quarter that put DNH up 21-0 right before half.

Joblinske then returned the opening kickoff of the second half 75 yards — his third touchdown of the game — and put the Wolverines up 28 points.

The Bulldogs (2-3) were quick to answer.

On the second play on the ensuing drive, Lake Mills faced second-and-seven on their own 33-yard line. Quarterback Royce Byrnes right out of the pocket and found Alex Grunhovd near the Bulldogs’ 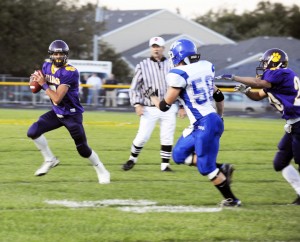 sideline. Grunhovd got behind the Wolverines’ secondary, turned to make the catch, and was tackled into the end zone for a 60-yard touchdown reception.

“Al plays hard in everything he does,” Bill Byrnes said of Grunhovd. “He plays hard all the time so that was the positive.”

Grunhovd also made the biggest defensive play of the game.

With the Wolverines threatening to score just over a minute before halftime, Grunhovd intercepted DNH quarterback Josh Rekers on second-and-goal on the Lake Mills’ six-yard line.

Trailing 35-6 with three minutes and 50 seconds left in the third quarter, the Bulldogs found some redemption for their earlier special teams hiccup when Grunhovd returned a kick 75 yards before being tackled at the Wolverines’ one-yard line. Royce Byrnes ran up the middle and into the end zone on the next play to make the score 35-12. 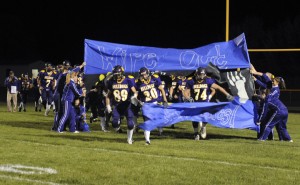 The two teams exchanged touchdowns in the fourth quarter — Lake Mills scored on a five-yard run by Tyler Rice — to make the final score 41-18.

The early deficit forced the Bulldogs to throw the football as they gained just 61 rushing yards on 16 carries, part of 231 yard of total offense.

“When you get behind then you kind of get out what you want to do,” Bill Byrnes said. “We’re struggling to find an identity.”

Grunhovd led the Bulldogs with four receptions for 132 yards and a touchdown.

Royce Byrnes was 5-of-10 passing for 170 yards with a touchdown and an interception. 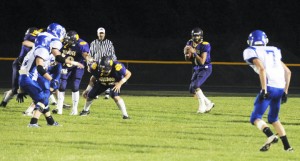 Royce Byrnes looks for an open receiver during the second half Friday against Dike-New Hartford. -- Andrew Dyrdal

The Bulldogs are in action again at 7 p.m. Friday when they play at St. Ansgar.